WHICH COUNTRY CONSUMES THE MOST SOFT DRINKS? 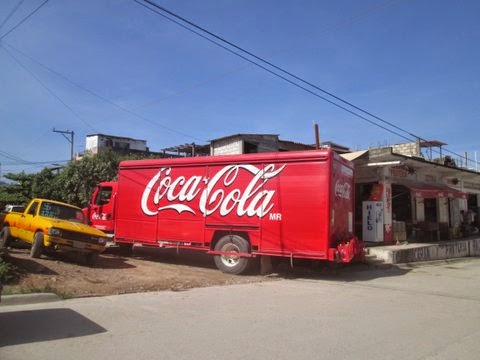 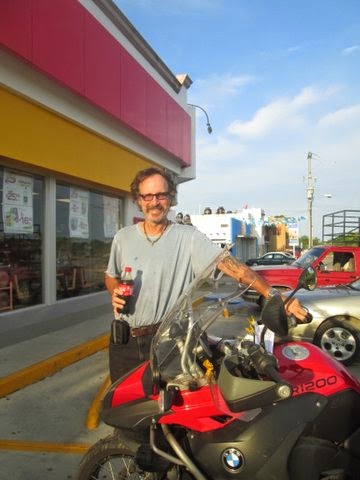 Due to road work, the detour directions to the clinic in el Progreso sounded complicated   I asked Frank Ohly, steadfast volunteer, if I could meet him somewhere and follow him to the clinic.  Frank suggested the Oxxo (equivalent to U.S. 7-11) around the corner from the defunct bull ring, which is close to the cruise ship terminals.   At 8:15 AM, Frank dismounted from his red and black BMW motorcycle as I pulled up, saying he needed to buy a Coca-Cola.  I laughed, as I had read an article about the “Coca-Colization” of México the night before, and asked if I could take his picture.

México consumes more soft drinks than anywhere in the world.
México´s obesity rate of over 32.8 has surpassed that of the U.S., which stands at 31.8.
70% of Mexicans are considered to be overweight.
Diabetes is the number one cause of death in México.
There are hundreds of Coca-Cola logos in and around Puerto Vallarta.  When I visited Chiapas, the southernmost and poorest state of Mexico, Coca-Cola´s presence was evident, even in the former church of San Juan de Chamula.  Inside, adults and children were swigging large bottles of Coke or a drink called “ponch,” which is a mixture of Coke and rum and something else.  Great belching, which the people believe rids them of evil spirits, follows.  In many parts of Mexico, Coke is often more accessible and less costly than water.  Children are being given Coca-Cola as a breakfast drink.  It´s even put in baby bottles for infants.
To read more about Coca-Cola in Mexico:

I followed Frank due east through detours, muddy roads and along an enormous expanse of green pressed up against the foothills of the Sierras, which looked pale purple in the morning. The clinic took place around the corner from the local tortillería in the former DIF building.

After passing many street dogs,  we arrived at the clinic shortly before 9 AM, where volunteers were helping Dr. Poly unload the mobile clinic (Poli´s horse trailer).   By 10 AM, there were only eleven registered pets, probably due to the ayutamiento not having distributed flyers.  So I did what I love to do most at the clinics – went out to look for pets.  After walking several blocks, passing a dozen or so dogs in the street with no collars nor owners nearby, I came to a yard with cats and dogs in it.  The owner wanted all of them sterilized,  so I went back to the clinic, put two cat kennels in my car and picked up small dogs and five cats and kittens plus two of the man´s granddaughters.

When I drove the young girls back, they asked me to pick up their friend´s pets. In a large dirt back yard filled with shade trees were five puppies, their mama and her teen-age son.  The puppies were loaded with ticks, mostly wedged between their toes, and were bloated with worms.  I asked if any of the puppies were for adoption, but the family wanted to keep all of them.  The young girls were darling.  They wanted so much to help and stayed to watch surgeries and pre-op.  They also promised to bring more people to the clinics on Thursday, and with great smiles, blew kisses to me as I drove away.

THIS CLINIC WAS MADE POSSIBLE BY A GENEROUS GRANT FROM HUMANE SOCIETY INTERNATIONAL.

“Emmanuel,” a young brindle puppy rescued from the Acopio by Shamira in July, fostered by Candace Shaw, neutered at a PEACEAnimals clinic,  and adopted by Cecilia Martinez the first week of August.

NEEDS HOME ASAP:
“Tyson,” a gentle brown and white male Pit Bull Mix, has been at the Centro de Acopio for a year-and-a-half.   Tyson was adopted last week and was so excited to be leaving the Acopio that he jumped uninvited into his new owner´s car.  Sadly, the nice young man owned another dog that didn´t like Tyson,  so he was returned to the Acopio.  Dogs are only to be walked twice a week there.  Tyson needs to go to a foster or permanent home as soon as possible.  Contact the Acopio:  293-3690

SOS!! “Cabezón,” the hound dog from el Tuito whose ear had been hacked off with a machete.  This noble dog is only three years old, but has osteoporosis.  His foster mother, Saashi Rodriguez,  is giving him daily massages and glucosamine and says he is now playing like a puppy with her other dog.  Saashi leaves for the U.S. September 8th, so a solution needs to be found for Cabezón as soon as possible.

I only met him once, but wished I could take him home with me.   I´m hoping someone will give him a wonderful home after his short life of homelessness and abuse.  For now, it is urgent that at minimum a foster home be found for him.  Cabezón is on a wait list to fly to Canada .  Saashi says he is polite, quiet,  intelligent, observant, loves human company and other animals and is a perfect pet.  Cabezón is waiting for a good home and a good new name.  Please submit your suggestions to me before August 31st.  Regarding fostering or adopting, please contact Saashi – [email protected]

Rescued by Shamira:  “Beethoven,” aka “Beto,” is a sweet 18-month old Pit Bull mix that has been neutered and vaccinated. Shamira just removed him from the Acopio after he had been there for six months.  He is great with children, adults and dogs but doesn´t like cats.    Contact Shamira if interested in either dog:  vinyasaflow_yoga

Shamira found a frightened young  Chihuahua mix inside the tunnel road on Friday night, August 1st.  Shamira, who saves many  animals,  said she was running out of rescue dog names, so is calling him”Tunel” (Spanish pronunciation=”Toonel”).

HOMES NEEDED:  For the thousands of dogs and cats on the streets here and for dozens of healthy and beautiful dogs and cats at the Centro de Acopio, the city´s no-kill pound.

Open Monday-Saturday from 8 AM-2 PM.  293-3690. The Acopio is now holding adoptions every Saturday from 11 AM-2 PM at Plaza Caracól (back end of building near McDonald´s entrance).   Dogs are walked twice a week by volunteers organized by Friends of Puerto Vallarta Animals.
RIDES FOR RESCUE DOGS NEEDED:  For Edmonton, Calgary and Vancouver.  All expenses for dogs paid for.  Please contact [email protected] or [email protected] GREATERGOOD – PLEASE CLICK!  Your daily clicks or direct donations help animals, people and the planet.  www.greatergood.org; www.greatergood.com


To donate to PEACEAnimals clinics, please click on this link.  http://bit.ly/1cWY0lP
SMILEAMAZON– When ordering on Amazon, if you click on the following link you can designate PEACEAnimals as a recipient of Amazon´s donation of  0.5% of your purchase.  http://smile.amazon.com/ch/20-3726038

Take the Highway 200 heading north from the airport. Go on the lateral along the Corona Beer Storage and bottling plant (close to the Bus Station). At the end of the corner make a RIGHT.  Drive to the end of the wide cobblestone street until you come to the SEAPAL sewer water treatment plant and make a LEFT.  Soon after,  you will come to a chicken shop and make a RIGHT on Jalisco St.  Drive in for about 3 blocks until you reach the corner at the Agencia Municipal.

Schedule, including directions and other clinic information are always on website:  www.peaceanimals.org 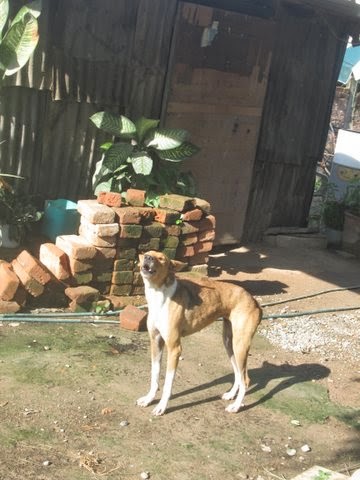 COST FOR ONE SURGERY WEEK CLINIC IS APPROXIMATELY  $1,700 USD.