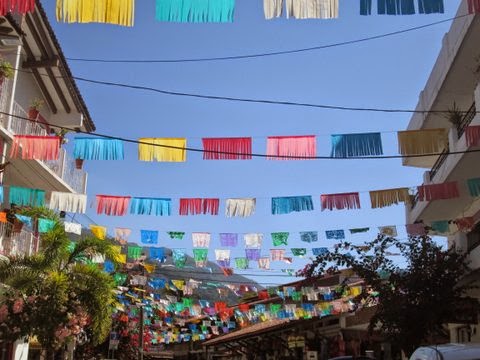 TVT doesn´t exist in the United States or Canada.  It is common in Mexico.  The initials stand for “transmissible venereal tumor.”  The tumors are malignant.

Las Juntas is a municipality approximately 30-minutes northeast of Puerto Vallarta.  After driving north on the highway and passing the airport, one turns east at the first stoplight after Home Depot.  The street is “Revolución,” 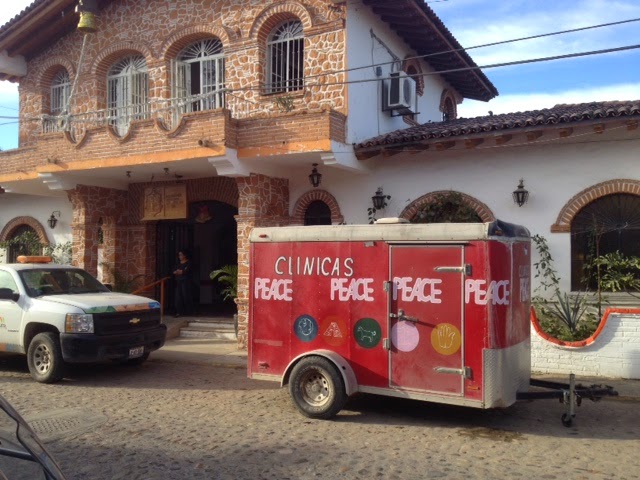 which one follows for a couple of miles before arriving at the town square.  Across the street is the “delegación,” the local government offices,  where the PEACEAnimals clinic took place.

When I arrived a little after 9 o´clock Friday morning, two women were standing next to emaciated young white Lab mix. 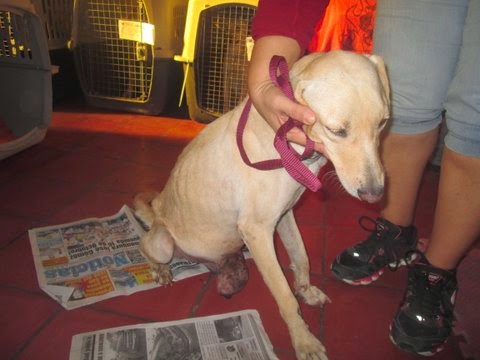 They were both weeping.   One stroked him as she held on to him and the other took photographs, saying she wanted her neighbors to see what can happen to an unsterilized dog. 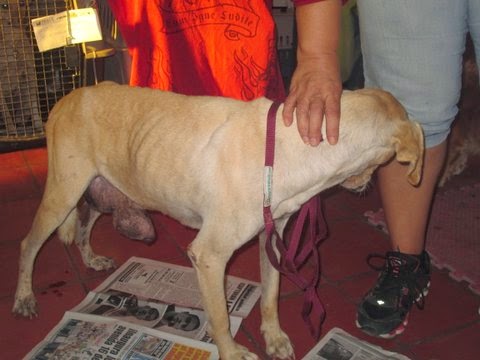 Then I noticed drops of blood on the red tile floor next to the dog.  I was shocked when I saw his genitalia.  The sweet, sweet dog who stood there patiently, gazing at the woman petting him,  had enormous tumors covering his sex organs.  After eight years of seeing very, very sad animal sights on the streets and at the clinics, I have not become immune to animal tragedy and cruelty. TVT is still a shock to me when I see it, and I have never seen such an extreme case.  The women said they had fed the dog chicken before driving him to the clinic from Ixtapa, a municipality close to Las Juntas.  They said he had been unwilling to drink.  The nameless dog had been rescued off the streets too late to save his life.  He was at the clinic to be euthanized, not sterilized.  Paulina tranquilized this young gentle dog, and after he was completely sedated,  put him to sleep. I felt so utterly sad, but grateful that the homeless dog didn´t die alone and hungry and in pain on a dusty road in Mexico.   Someone would have loved him.

TVT can often be treated successfully with chemotherapy.  It´s not expensive by U.S. standards – about 300 pesos a session.   Sometimes a dozen sessions are needed to shrink and destroy all the tumors.  The problem in a third world country is that most pet owners can´t afford this.  The  TVT for the nameless dog at las Juntas clinic had  advanced too far for him to survive.

The mission of PEACEAnimals is to “prevent the future suffering of animals.”  The dog that was euthanized on Friday had suffered.  He had had a very short life of starvation and sickness and shouldn´t have been born.  After years of working at the spay/neuter clinics, I can see that there are less male pet owners saying “I want my dog to be macho,” and less women and men saying “I want my pet to have at least one litter.”  But they still say it.  Once a man walking in front of his intact dog told me that “It´s okay if my dog gets TVT.  He´s just a dog and I can get another one.”

Our clinics are very busy, but the need still exists to continue educating pet owners in Mexico.  Unwanted cats and dogs starve, are hit by vehicles, get diseases, are abandoned and abused.   Until 85% of a local pet population is sterilized, the problem of overpopulation of pets exists.

Getting to that percentage will take time, education and example.  It will take funding.  Please consider donating.

20 animals prevented from being born to a life of suffering.

RESCUED AND FOR ADOPTION:  Cari le Clair saw two four-month old blonde Lab-mix puppies tied to a tree next to the río cuale.  People living nearby said they had been abandoned there. 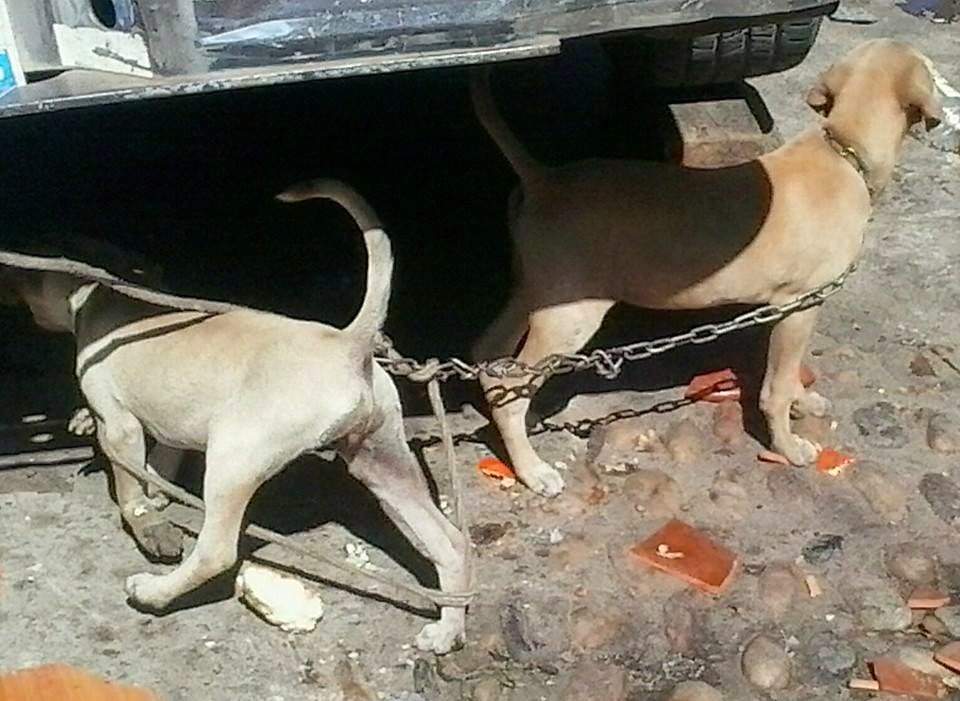 After giving them food and water and tying them up to a truck where they could have shade, Cari contacted MexPup and LADRA.  The puppies are now registered to MexPup and being fostered at LADRA.  If interested in adopting, please contact [email protected] or LADRA. 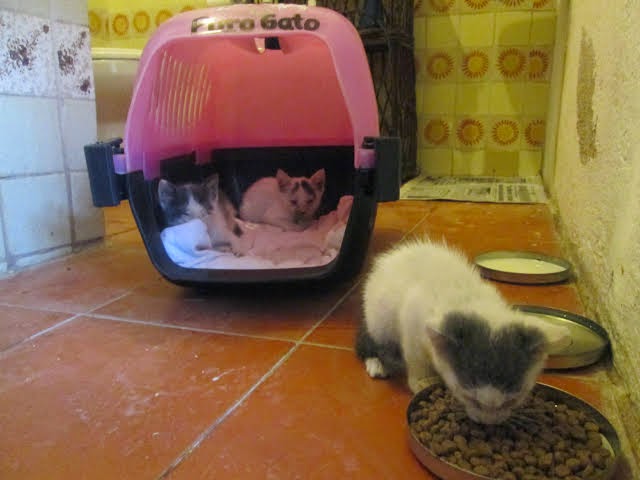 Four Siamese-mix kittens from the Isla Cuale.  I had seen two little white kittens next to the art studio on the Isla Cuale Tuesday afternoon.  Next to the black iron fence was a large cardboard box with one kitten inside of it and another kitten inside the locked, gated area.  I had just gathered up the three kittens when a young boy ran over to me saying the mother was inside the gated area with two more kittens. 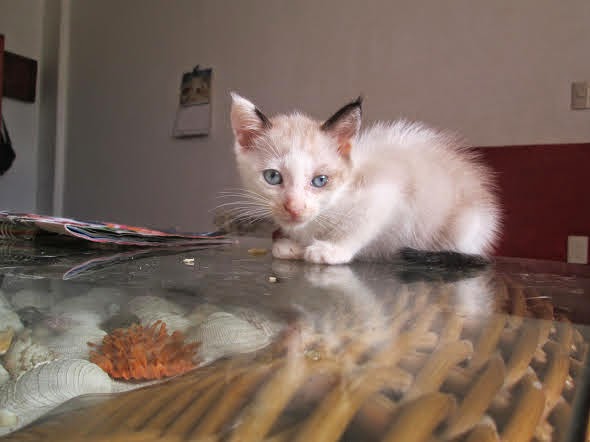 Not able to get inside that area, I put the box of kittens next to the fence, drove home and emailed Shannon Beston, who feeds the island cats every day. The next morning, Adriana Logue, who also feeds the abandoned cats and kittens daily on the rio Cuale,  found three of the kittens and gave them to Puro Gato for fostering. I found the fourth kitten – all white, sable-colored ears and tail and bright blue eyes, one of which was infected –  on Thursday. It seems there was no mama cat and no more kittens.  It was  another case of someone dumping more kittens on the tiny island.  If interested in adopting a beautiful kitten, please contact PURO GATO via FB.

IN FOSTER HOMES:  All of the kittens from the Acopio shown in last week´s blog. Eight cats are still at the Acopio and need homes.  There are also approximately 70 dogs there waiting to be adopted.

ADOPTIONS:  It was a black dog day for the Acopio adtoptions at the former mayor´s office across the street from the arches on the malecón. 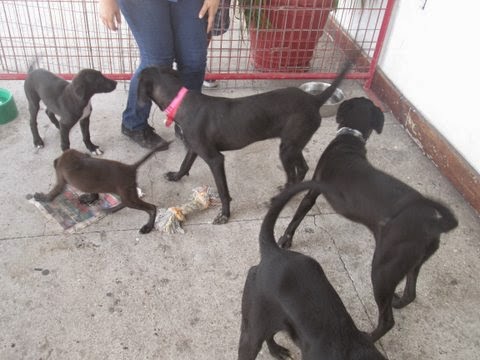 All of the dogs brought down from the Centro de Acopio were black, including two puppies taken to there by Corazón del Niña, an abused girls refuge.  I saw Soraya of Puro Gato, who was leaving as I arrived.  The young cat and two puppies she had brought to the adoption day were all sterilized and adopted.

A YEAR OR MORE AFTER BEING RESCUED AND ADOPTED:

HOMES NEEDED:  For the thousands of dogs and cats on the streets here, for hundreds of cats and dogs in refuges and in foster homes,  and for dozens of healthyand beautiful dogs and cats at the Centro de Acopio, the city´s pound.  Please check our website on the “resource” tab for names and contacts of refuges.

Monday-Saturday from 8 AM-2 PM.  293-3690 are adoption hours.The Acopio is holding adoptions every Saturday from 11 AM-2 PM at Plaza Caracól (back end of building near McDonald´s entrance) and Macro Plaza.

Dogs are walked twice a week by volunteers organized by Friends of Puerto Vallarta Animals.  Food is always needed. The government contributes almost nothing.

There are so many Pit Bulls or Pit Bull mixes that have been bred and then discarded.  Galilea is one of them and available for adoption at the Centro de Acopio.  Dogs at the Acopio live in kennels described by a local architect as places “suitable for pigs.”  On a good day, they are tied to a tree for a few hours.

THE VAQUITA MARINA (“small cow”) PORPOISE is endemic to the upper Sea of Cortez and is listed as the most endangered cetacean in the world.   Less than one hundred of the world´s smallest porpoises remain.  The vaquita marina is on the verge of extinction, not because they only reproduce every two years or because they are hunted, but because they are being caught in the same gill nets used to illegally gather the large totoaba fish in the upper Sea of Cortez.  Mexico will soon begin implementing drones in an attempt to save the small, shy dolphin from extinction.    To read the story:  http://www.sunherald.com/2015/01/19/6026349_mexico-to-use-drones-to-protect.html?rh=1

Many Chinese crave the bladder of the totoaba, because they believe it can be an effective treatment for fertility and circulatory and skin disorders. Two hundred bladders can fetch as much as $3.6 million USD at 2013 prices.

For centuries, many countries in their quest for modernization, enrichment and out of greed,  have deforested lands, polluted water sources and decimated and destroyed wildlife.  Education, advocacy, activism and enforceable laws are critical in order to save what remains.

SMILEAMAZON– When ordering on Amazon, if you click on the following link you can designate PEACEAnimals as a recipient of Amazon´s donation of  0.5% of some of your purchases.  http://smile.amazon.com/ch/20-3726038
SCHEDULE/HORARIO
January 28-31 – Villa Las Flores -Azucena esquina Bugambilia
Driving on the Boulevard from PV towards the airport, turn right at the Carl´s Jr/Pemex opposite Plaza Marina. Drive along the dirt road for about 7 blocks until Calle Azucena where you make  a right (there is a corner store called Marco). Drive ahead for two blocks and you will find us at the corner.
Februry 4-7 – Cañadas
Take the Highway from the airport towards Nayarit. As soon as you pass the Cerveza Corona make a right and drive to the end. Where the street ends (and where the sewer water treatment plant is),  make a left. Drive along Avenida Mexico, pass a small Pemex, continue as the road gets rough and bends. Soon you will see the street becomes broader. When you see a Kiosko store,  turn right. Pass the Conalep campus and after about 1km (1/2 mile) you will be on Calle Federación. There are no numbers,  but the clinic will be at the butcher´s  shop,”Carnicería Ñoño, just in front of a welding shop. It´s a small colonia and it only has this main road.  Any neighbor can give directions with those landmarks.
Feb 11-14: We are trying to do a clinic in collaboration with the health deptartment. Their staff has been going door to door in Pitillal telling people they must sterilize their pet,  or register and pay a breeder´s fee in order to keep intact pets. This will be tentatively close to the SPCA where Paulina saw  many backyard breeders of Pit Bulls and Dobies.  TBC
February 18-21 – San Blas – Casa de la Cultura (Pets for Life clinic)
February 25-28 – La Cruz, Nayarit – Sponsored by Funny Bones
March 4-7 – La Cruz (Pets for Life clinic)  Both La Cruz clinics tentatively located opposite Xocolatl restaurant, 100 meters/yards from the traffic light, on the highway. 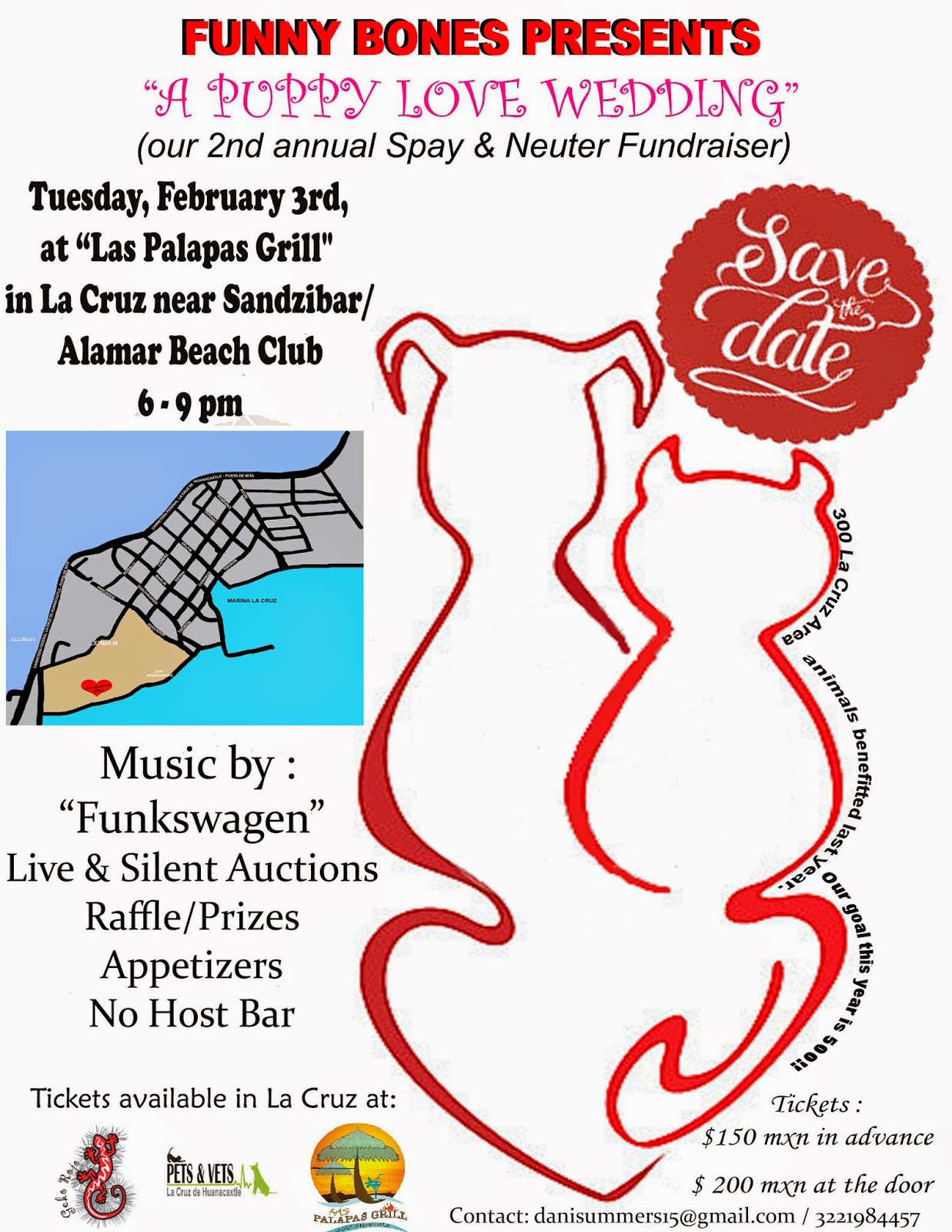 Clinic schedule, including directions and other clinic information are always on website:  www.peaceanimals.organd on this blog:  www.gretchen-peace-and-pv.blogspot.com

LUNCH DONATIONS NEEDED FOR VET TEAM:  PEACEAnimals has a budget of 70 pesos per vet team (three persons) per day for 4 days a week for lunches. Please consider bringing lunches for our vet team to the clinics. If you can do this, please let me know so we can create a lunch schedule. By having lunches donated, these savings can used for purchases of supplies and medicines.