The temperatures keep rising.  94.1 degrees this week.  Humidity has reached 80 %..  The rivers have turned brown with sediment and topsoil brought down from the hills as a result of heavy rains. 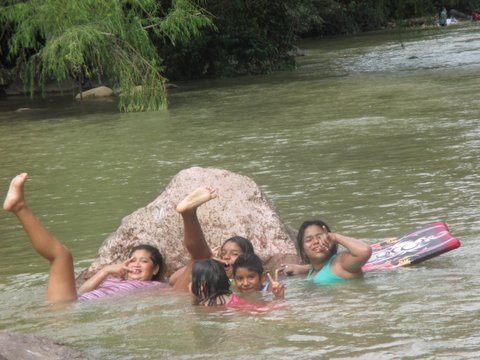 The locals sit in the rivers to cool off,  ride rubber rafts down to the bay, and  swim in deep spots. 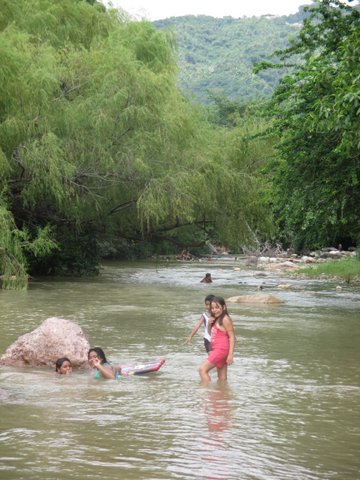 Cold showers don´t exist where water tanks are exposed to the sun.  On Wednesday, the sky was a steaming wet, grey blanket covering all of Vallarta.  The torrential rain in the evening was a blessing, and the lightning show late that night was the most thrillingly beautiful one I´ve ever seen… dozens of horizontal and vertical serpentine lightning,  ziz-zag formations that sometime seemed to be plunging into the sea, and bright,white coral-like branches of electricity in the dark night sky.  After the dazzling storm, the dense grey cloud cover was broken and the air began to move again.  Beautiful, beautiful sky.  Beautiful, beautiful earth.

I had ordered “Walkabout,” from Amazon and watched this beautiful film for the second time a couple of weeks ago.  Shot in the middle of Australia in 1971, it´s the drama of a fourteen-year old girl and her young brother who have been abandoned in the outback.   As they attempt to find water and food and their way back to Sydney, they encounter a 16-year old aborigine, who is on a “walkabout,” an initiation into manhood by survival in the wild.   The film is a lyrical tribute to the diverse beauty of the natural world.  “Walkabout”  poignantly contrasts the natural world with the civilized world, culminating in the loss of innocence and a lost Eden when the aborigine boy meets civilization. 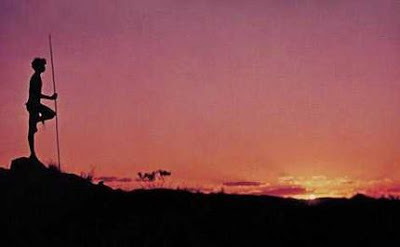 What resonates in the film is that civilization has had many gains, but these gains have created losses to the natural world through selfishness and greed.  Recent tragic examples include the herding of 250 pilot whales into the famous cove in the Faroe Islands, where they were cruelly slaughtered with knives.  The big animal news that followed soon afterwards was the illegal killing in Zimbabwe of “Cecil,”  the famous beautiful lion with a black fringed mane.  His killer, the dentist Walter Palmer, is only one of hundreds of trophy hunters photographed with proud smiles on their faces as they stand or crouch next to a the body of a beautiful exotic animal they have murdered.

Almost eclipsed by this tragic news because it happened shortly afterwards, five endangered elephants in Tsavo West National Park were killed by poachers from Tanzania.  A female and her four offspring had their tusks cut off.  The baby elephant was left with the bodies of its mother and siblings to grieve.  Ivory sells for more than $1,000 a pound in Asia. Like illegal drugs, when there is a demand, there will be a supply.

The animals have no defense against the sophisticated and powerful weapons that civilization has produced.  The destruction of African wildlife is all about money.  Exotic and endangered animals need more advocates.  This short list is of some actions that will help slow down the slaughter:

Initiate and/or sign petitions.  The White House has to respond once 100,000 signatures are obtained.
Donate to conservation organizations.
All international airlines unite in refusing to transport “trophy” remains (KLM and Air France have total bans on this; South African Airways, Singapore and and Air Emirates have partial bans).
Countries make it illegal to import “trophies.”  (The U.S. finally made it illegal to bring ivory into the country)
African countries stop issuing hunting licenses for trophy animals.
Countries of the world help fund wildlife sanctuaries so they can provide better protection, i.e., pay good salaries to game wardens and supplying them with the necessary equipment to combat poaching.
Trophy hunters stop hunting endangered animals.  Instead of paying approximately $50,000 to kill one,  donate that same money to conservation efforts. 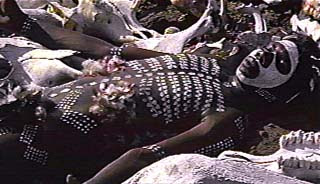 With so much sad news for exotic animals,  it seems like something very, very small to me to be trying to save cats and dogs from being born to suffer in Mexico.   But this is where I am and this is what PEACEAnimals is doing.  The problem here is quite the opposite of the tragedy taking place in Africa.  Mexico has an extreme overpopulation of cats and dogs.  There are an estimated ten million dogs living on the streets in this country, with no estimates available for the number of cats.  Cats and dogs are not endangered animals.  They are at great risk of being born to suffer in many countries. Mass free sterilization programs do the greatest good for the greatest number of cats and dogs. 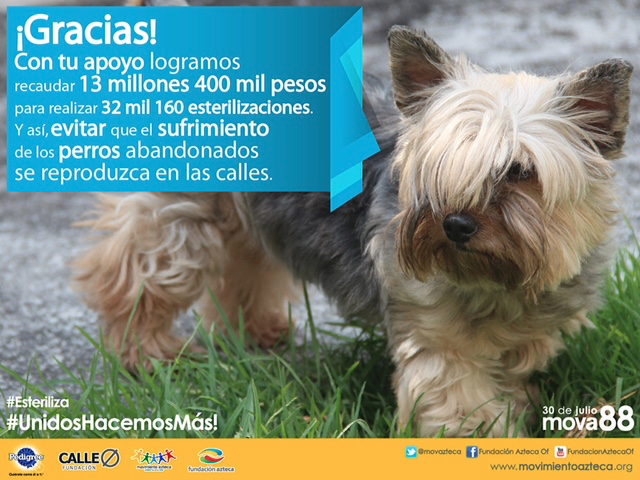 PAULINA REPORTS THAT TO DATE, ENOUGH FUNDS HAVE BEEN RAISED BY THESE TV SPOTS TO PAY FOR THE STERILIZATION OF 32,160 CATS AND DOGS!

COLONIA VILLAS UNIVERSIDAD was a very uncomplicated (only three street turns) 25-minute ride north northeast of centro.  Because directions on Google Earth often don´t work, I had asked Frank Ohly, our regular volunteer, for directions.  They were perfect. 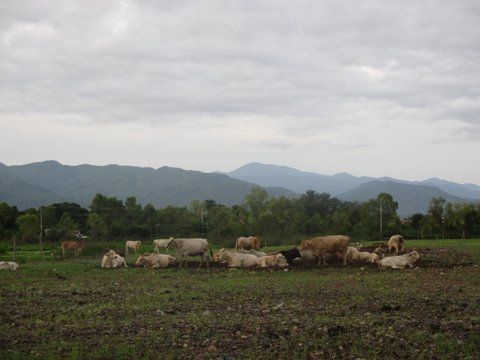 Driving through a rural area on my way to the clinic, I approached the lovely sight of cows in a large green pasture with the undulating foothills of the Sierra Madres in the background.  I turned onto a muddy dirt road so I could take photographs. 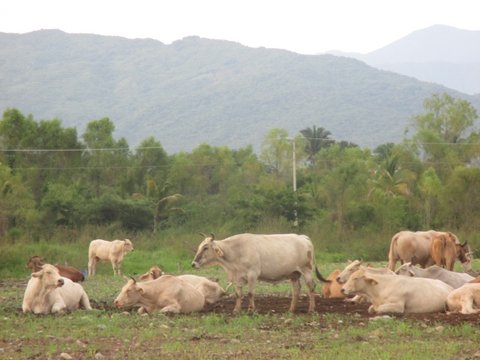 Numbers lower than usual due to a combination of bad directions on Google Earth and Google Maps, the heat and humidity, and summer vacation.

All pet registration forms with signatures of owners or rescuers are submitted by Dr. Poli to the local department of health, with copies to PEACEAnimals.
DONATIONS AT CLINIC IN VILLAS UNIVERSIDAD:
Amount not yet counted by Dr. Poli.

DESIGNATED LINE WITH ADDRESS AND DIRECTIONS FOR WEEKLY CLINIC (SPANISH ONLY)   (322) 113 3955
PERMANENT AND FOSTER HOMES NEEDED:  For the thousands of dogs and cats on the streets here, for hundreds of cats and dogs in refuges and in foster homes,  and for dozens of healthy and beautiful dogs and cats at the Centro de Acopio, the city´s pound.    The Acopio is open Monday-Saturday from 8 AM-2 or 3 PM.  Local phone number:  293-3690
Please check our website under the “resource” tab for names and contacts of refuges, vets, etc.
RESCUED AND NEED HOMES:

Cat in the Tree – I took the young female Siamese-mix from the Isla Cuale to Dr. Tamayo because she had an infected cat bite.  She´s now with me and on antibiotics for two weeks.  She is very friendly, even with dogs.  Am calling her “Sheba.”  She is under one-year old, spayed , loves dogs and people and needs a home.  Please contact me.

Beautiful white eight-month old male cat with wonderful blue eyes.  Neutered and very friendly.  Like many white cats with blue eyes, he is deaf.      Please contact Puro Gato via FB if interested or if you would like to foster or adopt a cat or kitten.  Their inventory currently consists of 15 female cats or kittens, 12 male cats and kittens and 6 too young to determine sex.  Out of the 33 felines, 24 are rescues from the Isla Cuale.

DIRECTORY OF RESCUED ANIMALS –  for a three-minute tutorial: https://www.youtube.com/watch?v=wfJvn1wTkWs
http://gooddog.pw/my-account/
SMILEAMAZON– When ordering on Amazon, you can designate PEACEAnimals as a recipient of Amazon´s donation of  0.5% of some of your purchases.  http://smile.amazon.com/ch/20-3726038
www.wooftrax.com – EVERY TIME YOU WALK YOUR DOG, THEY DONATE TO YOUR LOCAL ANIMAL SHELTER IN ALL 50 STATES.
SHEDULE/HORARIO:

Francisco Villa towards Pitial.
Right on Revolucion
Left on Ecuador
Right on Pablo Franco
Go about two blocks and follow the road and veer to the left
Keep following road and then veer to the right.  (large park is on your right)
Keep following road as it slightly goes up hill.
Look for the dirt road on the right side that goes to the horse arena.

WE NEED LOCATIONS FOR OUR CLINICS IN NEIGHBORHOODS AND TOWNS.  REQUIRED:  BATHROOM, ELECTRICITY, WATER AND PARKING SPACE.
NECESITAMOS LUGARES PARA NUESTRAS CLÍNICAS EN COLONIAS Y PUEBLOS.
PRECISO:   BAÑO, ELECTRICIDAD, AGUA Y PARA ESTACIONARSE.
NOTE:  PEACEAnimals, per our agreement with independent contractors, Pets for Life, is obliged to pay extra for driving time and gasoline for areas outside Puerto Vallarta.
Clinic schedule, including directions and other clinic information are always on website:  www.peaceanimals.organd on this blog:  www.gretchen-peace-and-pv.blogspot.com
LUNCH DONATIONS NEEDED FOR VET TEAM:  PEACEAnimals has a budget of 70 pesos per vet team individual (three persons) per day for 4 days a week for lunches.
Please consider bringing lunches for our vet team to the clinics. If you can do this, please let me know so we can create a lunch schedule. By having lunches donated, these savings can used for purchases of supplies and medicines.
WE NEED VOLUNTEERS AT THE CLINICS.    Please sign up:  [email protected]
If directions needed, please call our dedicated line (directions are only in Spanish) or refer to our website or this blog.
COST FOR ONE SURGERY WEEK CLINIC IS APPROXIMATELY  $1,800 USD.  OUR CLINICS NEED FUNDING.
PLEASE CONSIDER MAKING A DONATION VIA CHECK, CREDIT CARD, PAYPAL, BEQUEST OR STOCK TRANSFER.  Note:  Stocks are transferred at full value without the donating stock owner being taxed.   Name of recipient of donations  for all donations is simply “PEACE.”
#################################################