A PLACE I LOVE 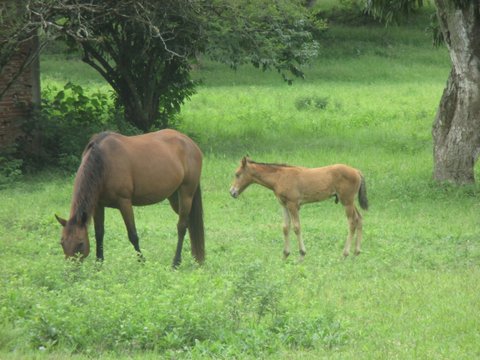 I love Rancho Primavera in el Tuito, which is an hour´s drive south of Vallarta.  It´s ranch and farm country, filled with animals and orchards and is very beautiful country.  With storm clouds gathering,  it was almost as hot and humid there on Friday as  it was in Puerto Vallarta.  After checking into the house on the small lake with my three young grandchildren, we went with Bonnie Jauregui, one of the owners, to look at the twenty bunnies and almost as many chickens in the large hen house.  Also there and being fostered by Bonnie, a one-year old rescued macaw named “Eduardo,” who is just learning to fly from ropes to a large branch and a dangling piece of driftwood.

It was a surprise when he landed on my head.  After a swim in the lap pool, we walked back to the lake house to change into our riding clothes and to cover our exposed skin with olive oil.  It seems to be the best protection against bites from the “jejenes,” the tiny mosquitoes that are called “no-see-ems” by northerners.  On the side of the dirt road, we spotted a slender green garden snake slithering through the grass with the head of a large green and yellow frog in its mouth.  The legs of the frog were still moving. 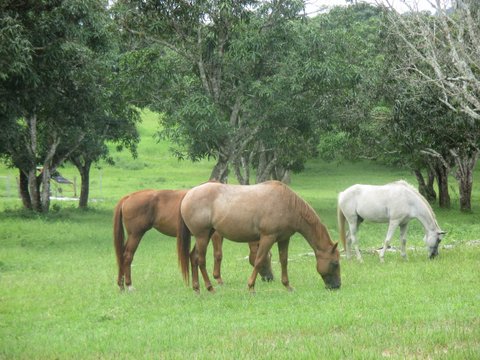 We met Bonnie at the stables, who had rounded up five of the twenty-plus horses that roam free on the gorgeous 2000-acre property.  A beautiful four-week old foal was there nursing from a horse that Bonnie hadn´t known was pregnant.   There are no stallions on the ranch, so the mama had had a visitor. 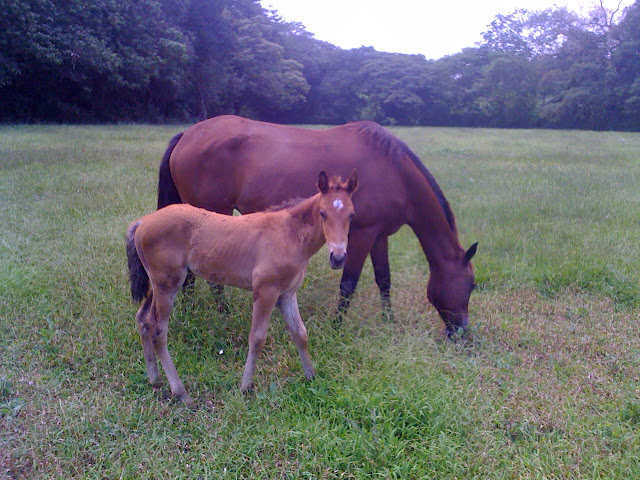 Bonnie had been worried about the baby soon after its birth, because he had been bitten by his brother, a yearling, as well as by vampire bats.  The foal, yet to be named, is thriving.

Early evening riding was on some of the many trails, through mango orchards, past passion fruit vines growing next to a stream,  and across the green meadows where white ginger grows wild,  giving off a delicious fragrance. 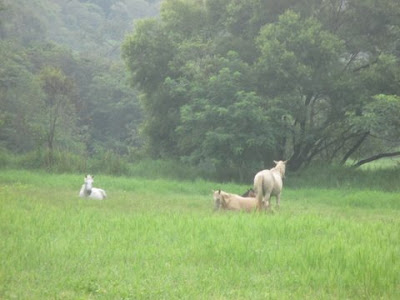 Dinner was late – and tasty- in a tented taco stand,  while torrents of rain fell and thunder and lightning filled the sky above us. www.ranchoprimaveramexico.com

NOT ABOUT CATS AND DOGS:  As importing ivory to the U.S. was finally outlawed, perhaps importing heads of endangered trophy animals will be outlawed sometime in the future.   These beautiful animals belong to the earth and should not be allowed to disappear forever.  Please consider signing and sharing: https://www.change.org/p/president-barak-obama-ban-all-imports-of-trophy-heads-of-endangered-animals

Looking at this wonderful photograph below, I cannot imagine how anyone would get pleasure out of destroying this noble and beautiful animal.

South African Airlines continues to transport “trophy” heads.  This is about money.   To protest via Humane Society International´s petition:   https://action.hsi.org/ea-action/action?ea.client.id=104&ea.campaign.id=40925&ea.tracking.id=facebook  (FedEx and DHL also transport trophy heads).  You can also call SAA in the U.S.  954-769-5000 (then dial 5 for corporate communications).

Two endangered beaked whales, beached on the shores of the Faroe Islands this week, were slaughtered with knives by the local residents.  In other parts of the world, humans make great efforts to get beached whales back into the water because they have a reverence for rife.  Several days later, dozens of pilot whales were herded into the infamous cove and stabbed to death.  Two hundred and fifty pilot whales were hacked to death in the Faroe islands weeks ago.   This is the behavior of savages.   To protest:  Prime Minister Lars Løkke Rasmussen – email: [email protected]

The good news – Last year, Disney Cruises cancelled all visits to the Faroes and this week two major German cruise-liner companies, AIDA and Hapag-Lloyd, have cancelled as well.

CATS AND DOGS:  They are not endangered anywhere.  In Mexico and in many other countries they are simply in danger of being born to suffer.  Unwanted and uncared for cats and dogs starve, are hit by vehicles, become diseased, are abandoned and abused.  Estimates of the pet food industry and UNAM are that 50% of Mexican homes have pets, which means over 20 million companion animals have owners.  Many owned dogs run free on the streets,  live on a roof or tied up in a garage or outside a house or business.

There are over 10 million  homeless cats and dogs in Mexico. The number of pounds is low – not even half  the municipalities have one.   Pounds are required by law to keep strays for 72 hours before disposing of them, usually by electrocution, which is allowed by the Norma Oficial Mexicana (NOM 033).   No estimates are available on how many cats and dogs are put to death annually in Mexico.

Every year in the U.S. there are an estimated 7.6 companion animals in pounds and shelters.  Approximately half of these animals are dogs and 31% of them are euthanized annually.

VALLE DORADO, NAYARIT – From centro, it is about a 45-minute drive to Valle Dorado in the nearby state of Nayarit.  Both the states of Jalisco and Nayarit share Banderas Bay.  The neighborhood of Valle Dorado (“Golden Valley”) is a few minutes drive north of Nuevo Vallarta, which is very upscale and doesn´t have anything of Old Mexico about it.  Valle Dorado is not a golden valley.  It is  a real estate development with rows and rows of small, one-story cement and cinder box houses that sell for about $60,000 US.  This is a community of hard-working families, many of whom work at the hotels and time shares in Nuevo Vallarta.

It had been a year since PEACAnimals visited this neighborhood, and there were lots of animals to take care of.

On Thursday, 43 cats and dogs were accepted, including two pretty puppies in foster homes for adoption and an enormous, long-haired black and white dog that didn´t look happy in the heat.

Thank you to Amanda Jimenez and her husband for offering their home as a location.  Amanda is the contact on FaceBook for the two rescue puppies.  Amanda Louise Jimenez Frederick

DONATIONS IN VALLE DORADO: 2,320 PESOS
The local government paid the extra costs to the vet team for travel time and gasoline.
All pet registration forms with signatures of owners or rescuers are submitted by Dr. Poli to the local department of health, with copies to PEACEAnimals.

DONATIONS TO PEACEANIMALS:  Sharon Tognietti and Martin Weber-
$3,000 USD   Sharon and Martin, full-time residents of Vallarta,  are board members of NOBARS, a Canadian-based dog rescue/adoption organization.

DESIGNATED LINE WITH ADDRESS AND DIRECTIONS FOR WEEKLY CLINIC (SPANISH ONLY)   (322) 113 3955
PERMANENT AND FOSTER HOMES NEEDED:  For the thousands of dogs and cats on the streets here, for hundreds of cats and dogs in refuges and in foster homes,  and for dozens of healthy and beautiful dogs and cats at the Centro de Acopio, the city´s pound.    The Acopio is open Monday-Saturday from 8 AM-2 or 3 PM.  Local phone number:  293-3690 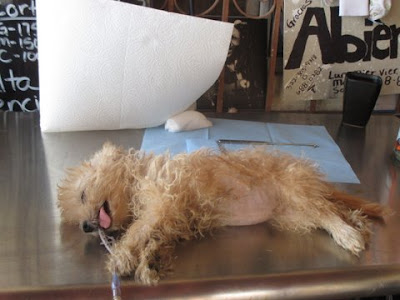 DIRECTORY OF RESCUED ANIMALS –  for a three-minute tutorial: https://www.youtube.com/watch?v=wfJvn1wTkWs
http://gooddog.pw/my-account/

SMILEAMAZON– When ordering on Amazon, you can designate PEACEAnimals as a recipient of Amazon´s donation of  0.5% of some of your purchases.  http://smile.amazon.com/ch/20-3726038

www.wooftrax.com – EVERY TIME YOU WALK YOUR DOG, THEY DONATE TO YOUR LOCAL ANIMAL SHELTER IN ALL 50 STATES.
SHEDULE/HORARIO:

We need a place to stay for our vet tech, Leslie Caratachea, for the San Sebastián clinic.    Krystal Frost is providing a place for Dr. Poli and Dr. Anthony the week of the clinic.

WE NEED LOCATIONS FOR OUR CLINICS IN NEIGHBORHOODS AND TOWNS.  REQUIRED:  BATHROOM, ELECTRICITY, WATER AND PARKING SPACE.
NECESITAMOS LUGARES PARA NUESTRAS CLÍNICAS EN COLONIAS Y PUEBLOS. PRECISO:   BAÑO, ELECTRICIDAD, AGUA Y PARA ESTACIONARSE.
NOTE:  PEACEAnimals, per our agreement with independent contractors, Pets for Life, is obliged to pay extra for driving time and gasoline for areas outside Puerto Vallarta.
Clinic schedule, including directions and other clinic information are always on website:  www.peaceanimals.organd on this blog:  www.gretchen-peace-and-pv.blogspot.com
LUNCH DONATIONS NEEDED FOR VET TEAM:  PEACEAnimals has a budget of 70 pesos per vet team individual (three persons) per day for 4 days a week for lunches.
Please consider bringing lunches for our vet team to the clinics. If you can do this, please let me know so we can create a lunch schedule. By having lunches donated, these savings can used for purchases of supplies and medicines.
WE NEED VOLUNTEERS AT THE CLINICS.    Please sign up:  [email protected]
If directions needed, please call our dedicated line (directions are only in Spanish) or refer to our website or this blog.
COST FOR ONE SURGERY WEEK CLINIC IS APPROXIMATELY  $1,800 USD.
PLEASE CONSIDER MAKING A DONATION VIA CHECK, CREDIT CARD, PAYPAL, BEQUEST OR STOCK TRANSFER.  Note:  Stocks are transferred at full value without the donating stock owner being taxed.   Name of recipient of donations  for all donations is simply “PEACE.”
THANK YOU TO OUR SPONSORS: 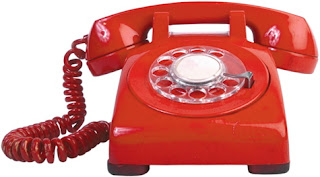