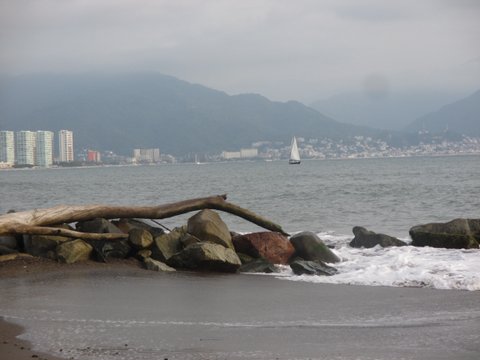 Boca Negra beach is a long stretch of sand by the airport that leads to the white mangroves.  During the week, it´s usually deserted and a perfect place for a long walk, with or without dogs.    The beach resembles a California beach, as the sand isn´t powdery white and the water isn´t clear.  And because the water isn´t transparent  and because there is a nearby lagoon filled with crocodiles, I don´t do a lot of swimming there. 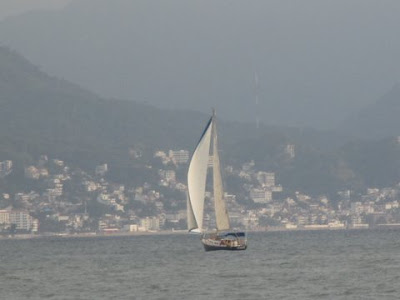 To arrive at Boca Negra, one can turn west at Plaza Marina, passing the wonderful long mosaic wall, the golf course and then one is there. 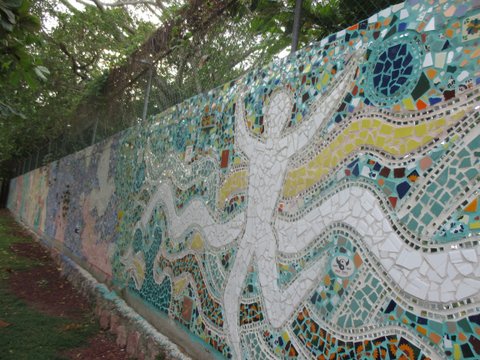 My favorite swimming beaches are Punta Negra and las Gemelas,  about twenty minutes south of Vallarta.  Punta Negra is great for body surfing and swimming and las Gemelas very nice not only for swims, but also for snorkeling by the dark rocks at both ends of the beautiful little beach.

Walking our dogs on the isla Cuale, I stopped to talk with costumed and painter dancers who were on their way to the malecón to perform.  They were with two Xolos, also painted and whom they said would be bred when they were mature.

Native to México, the Xoloitzcuintle or Xoloitzcuintli, also known as the Mexican Hairless Dog, is a breed that has existed for 3,000 years.  It is listed as an endangered species. The Xolo was considered an earthly form of the god Xolotl, who was believed to accompany souls to their final resting place.  A practice of the Aztecs was to sacrifice Xolos and be buried with them.  The breed was also raised in herds like cattle by indigenous people in Mexico and sold in the markets as food which would not only be an excellent source of protein, but would also provide curative powers over physical problems. When the Europeans brought their dogs to the New World, the Xolo breed was diluted,  but the hairless gene was powerful enough to enable the continuation of the breed.   Although one can see several Xolos in and around Vallarta (sadly, there are several in the private zoo here), the breed remains a rare one.

In Egypt, Anubis was a canine worshiped as the god of funerals and death.  The  Egyptians of the First Dynasty (c. 3100-2890 BC) worshiped Anubis in the full animal form of a jackal

or as a man with a jackal head.  Anubis was depicted in black, symbolic of rebirth and also the discoloration of the corpse after embalming.  Anubis was the protector of embalming and of graves.  As scavengers, jackals were associated with death because they were digging up bodies that had been buried in shallow graves.


CATS:  The dedicated people who feed and also collect kittens and cats on the isla Cuale to have them spayed and neutered and then fostered or found homes for, report many less cats now on the island.  This information comes in the same week that the Cultural Center held a meeting where one of their bullet points re plans for the isla was the “removal of the plague of cats from the island.”

Cats damage the ecosystem.   They are on the island simply because they are being dumped there almost daily.  Although there are signs posted on the isla cuale advising “don´t do it if your dog does it,” there are no signs advising that it is illegal to abandon animals, nor signs advising of free spay/neuter clinics.  These two simple items have been requested for many months.

DONATIONS TO PEACEANIMALS:  Anonymous-  $1,800 USD – which will pay for our clinic scheduled to take place the surgery week of December 16 in Coapinole.  As a result of this very generous donation, over 100 cats and dogs will be sterilized.

$300 pesos in advance and $350 pesos at the door
Tickets are available now at Daiquiri Dick’s. 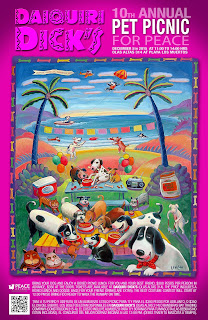 I have volunteered to secure items for the live auction.  If you have something wonderful to donate (dinners in private homes; sails on the bay; tennis or golf lessons with a pro; a piece of art; hotel overnights, villa overnights;  cooking classes; etc.),  please contact me.  Robert Burkheimer, auctioneer extraordinaire,  has donated his professional services to this event.  To date,  the following has been confirmed:    (SUBASTA PARA PEACEANIMALS):

Casa Mariposa in San Sebastián – two nights for up to eight persons –
https://www.flipkey.com/san-sebastian-del-oeste-villa-rentals/p1323418/

Lunch for six and afternoon swim in the bay or the edgeless pool at the spectacular Villa Mandarinas in Mismaloya – www.villamandarina.com

THIS IS A FUN EVENT AND PROVIDES FUNDING FOR PEACEANIMALS FREE SPAY/NEUTER CLINICS.

If you cannot attend and would like to bid on any of the above items, please contact me.