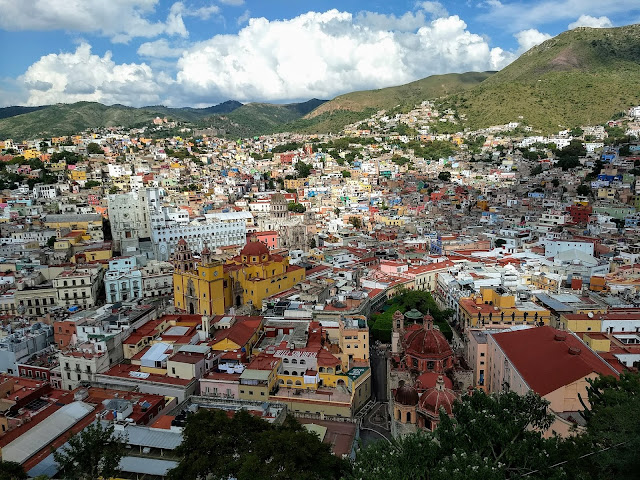 After a 45-minute flight from Puerto Vallarta, we landed in the industrial city of Leon (“Lion”), in the highland state of Guanajuato.  From there, it was a 40-minute, 500 peso taxi ride to the beautiful city of Guanajuato.

lovely theatres, a large university, the huge mercado Hidalgo, and colorfully painted houses that tumble down  hillsides.  The main roads of Guanajuato consist of eighteen underground tunnels that twist and turn where rivers once ran.  A drive through them would thrill a small child. 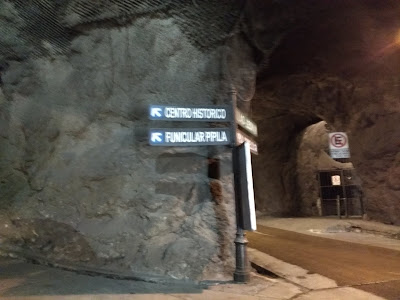 Guanajuato is acclaimed internationally for the Cervantino Festival, the largest annual arts festival of its kind in Latin America.   Lasting eighteen days, the Cervantino is celebrating its 46th year with an extraordinary program of film, theatre, music and dance.

The music isn´t just being played on stages. Enterprising and talented musicians are playing day and night on street corners and in cafe´- dotted plazas. 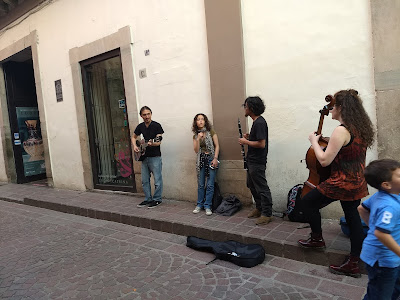 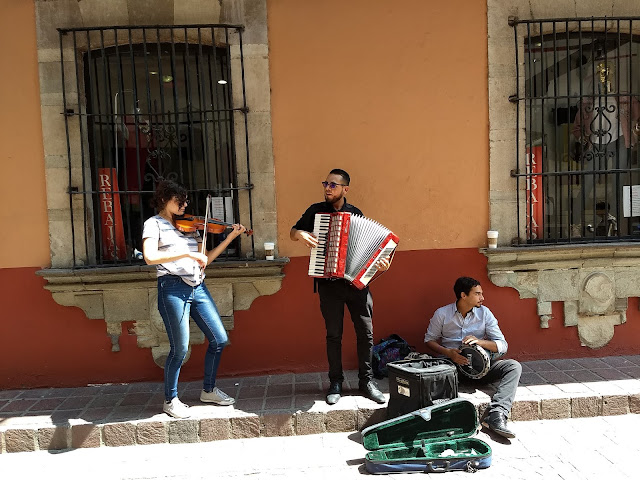 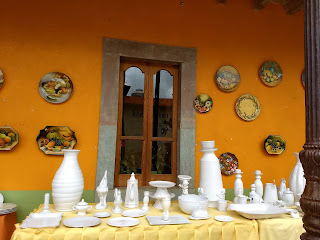 A ten-minute excursion from our hotel in colonia Valenciana was to the small hillside village of Santa Rosa.  Main attraction there is the very large ceramic factory/store of Mayolica Santa Rosa.  The white ceramic plates, serving pieces, etc., which we had seen in a few upscale restaurants in Guanajuato, are especially good looking.  (www.mayolicasantarosa.com)

we buy small bags of Mexican wedding cookies and loaves of candied fruit-covered bread. Next door, the owner of “Daisy,” a seven-month old yellow Lab mix, throws a bucket of water on a large, male Husky.  Daisy is in heat and the two dogs run off together.

The Sunday before leaving for our week in Guanajuato was a panga morning.

Even though the only animals we saw were two olive ridley turtles, a yellow footed booby bird perched on a log,  and a small, white tern sitting on a chunk of styrofoam, which Karla de la Peña picked up with a net, it was a glorious day. 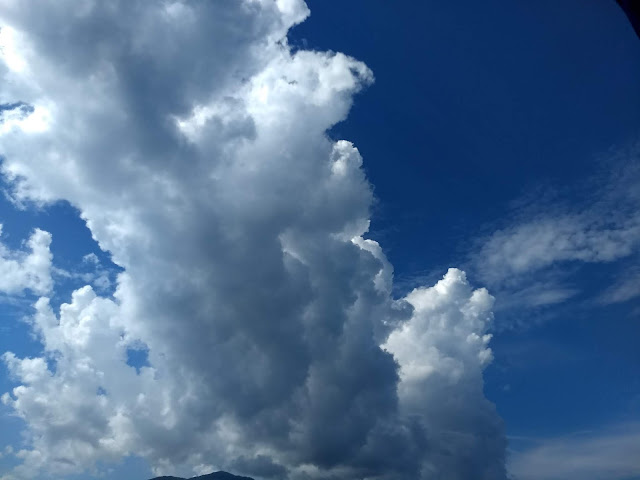 With a ceiling of fleecy clouds over our heads, we swam in the warm, pale green water off the beach at Pizota.  Karla noticed a dead boa constrictor floating near her and swam with it to the panga. The beautiful snake, harmless to most living things,  had had its head smashed by a human.  Captain Daniel threw it overboard, where this garden of eden creature would become food for fish. 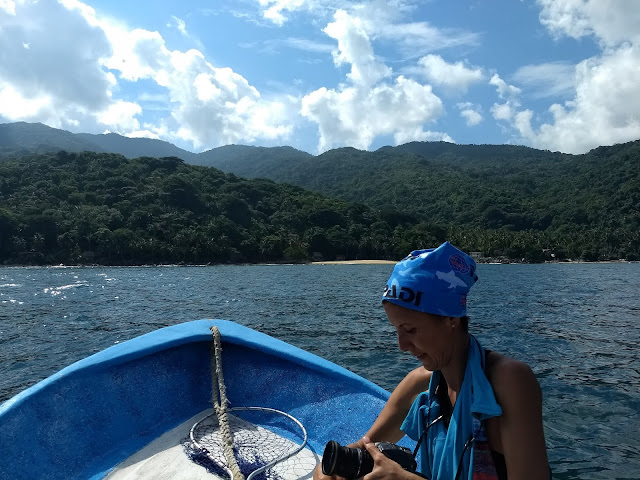 LAS ARALIAS:  At 8:30 in the morning on Thursday, I saw what I love to see – a line of people with pets waiting across the street from the clinic.

We have used this very convenient location across the street from los sauces park a few times every year. Thank you to Sofi Gonzalez for letting PEACEAnimals use her spacious bodega.

There was only one kitten and no cats when I was there.  The pretty kitten´s sibling had escaped from its kennel at the park, but was captured shortly afterwards. A softly spoken gentleman with white beard and moustache and wearing a blue baseball cap,  brought an abandoned dog he has been feeding for months.  Carlos, who lives in the neighborhood, has given the very sweet dog the name “Hugo,” and hopes to find a home for him.  Hugo, a handsome Lab mix, is three years old.  If interested:  224 0591

PLUS pregnancies terminated for 1 cat with 5 fetuses 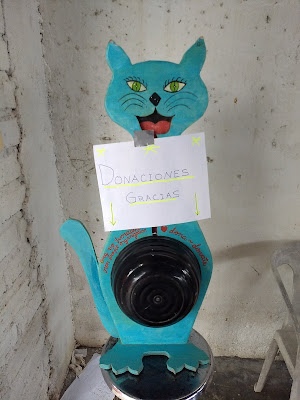 STERILIZATIONS IN MEZCALES, NAYARIT (absent for this clinic, which took place in the small inland town between Vallarta and the beach town of Bucerias).

DONATIONS AT CLINIC IN MEZCALES: 1,890 PESOS

DONATIONS TO PEACEANIMALS: None these past two weeks.