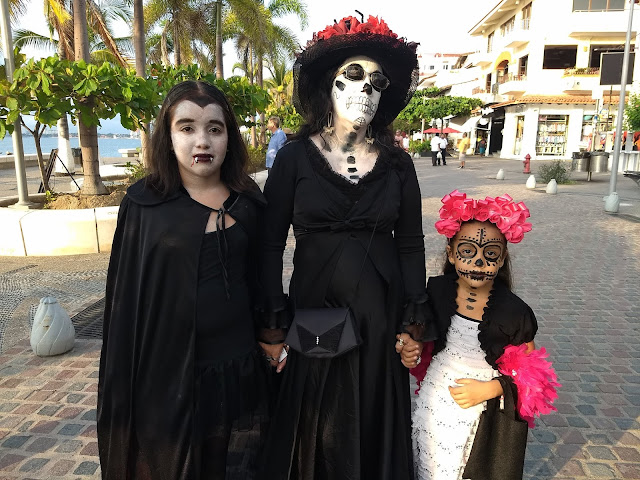 HALLOWEEN, so close to the dates of  “el Día de los Muertos,”  has made inroads into non-traditional Mexican towns.  Costumed children parade on Vallarta´s malecón past oversize Catrinas and skeletons, most of which are installed,with signage,  by local hotels. 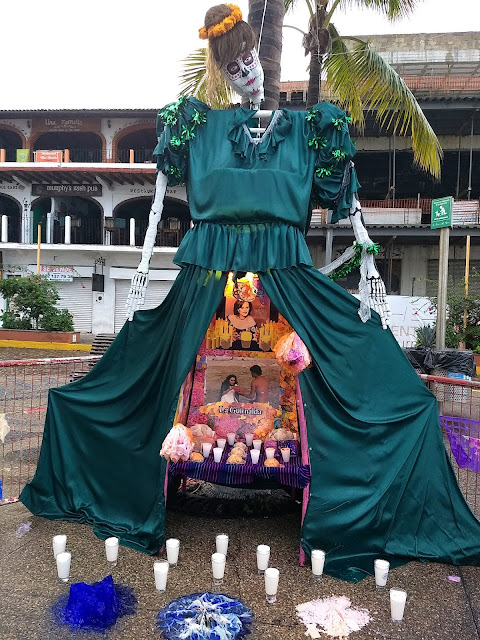 On their way to the zona romántica,

candies collected from restaurants mean plastic wrappers are often tossed on sidewalks, even though trash containers are a few feet away.  Fortunately for street cleaners, there was a sudden, heavy rainfall later in the evening, which ended the trick or treating early.

To truly celebrate “el Diá de los Muertos, one needs to visit a non-touristic place where the locals celebrate the lives of friends and family who have left earth.  Altars are built with flowers, food, photographs and other remembrances.  Patzcuaro is a wonderful place to visit for this celebration. 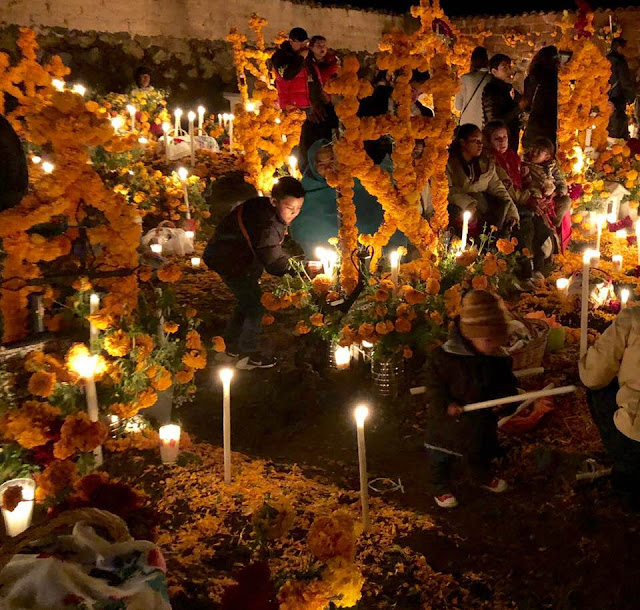 PEACEANIMALS THIRD ONLINE AUCTION!
We will launch www.32auctions.com on December 1st and close bidding on December 15th.  Great auction items are being collected.  Vallarta Adventures was the first to donate: Four adventures of bidder´s choice for two persons- value:  approximately $1,000 USD.  If you have contacts with hotels, restaurants, spas, golf, sailing, tennis, etc., please contact me.  We would like this auction to be as interesting and successful as possible. Thank you!

COLONIA DEL MAR, one of two hundred and fifty colonias in Puerto Vallarta,  is a partly rural neighborhood situated high on a hill above the center of town.  Depending on where one stands, there is a very distant view of the bay.  Rocio, owner of Pozolería Chipancingo restaurant, offered the empty cement downstairs space for our clinic and donated a delicious pozole lunch to the vet team on Saturday. 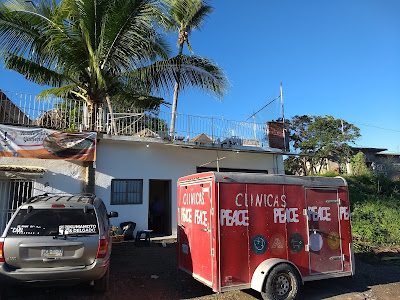 SAN JAN DE ABAJO, NAYARIT:  A small town in the municipality of the Bay of Banderas in the neighboring state of Nayarit.  Leaving home at 7:30 AM Wednesday, I drive north to Mezcales, where one turns east at a stoplight and drives straight towards the foothills.  After fifteen minutes, the road begins to curve through small towns where dogs of all sizes roam and bare-chested, young teen-age boys practice with lariats on sidewalks. The road becomes straight again as it passes intensely green fields and then under a high, brick “Bien Venidos” arch to San Juan.

An hour later I arrive at the clinic in the front patio of Chely´s home,  where more than 30 animals were registered at 7 AM by three broadly smiling volunteers.

Chely, who has sixteen rescue dogs,  is feeding the vets an enormous breakfast.  Thirty minutes later she brings in five more street dogs for sterilization.  This is our sixth visit to San Juan in three years.  Due to the generous and enthusiastic response the vet team receives, this is a favorite location. 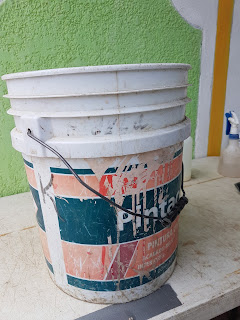 PLUS one pregnancy terminated for a dog with 4 fetuses

EDUCATION PROGRAM:  Vet tech and education director, Leslie Caratacha, was unable to make a school presentation on October 23rd.  Schools were all closed due to Hurricane Wilma, who never arrived.   Also no presentation the following Tuesday in Nayarit, as location is an hour´s drive by car.