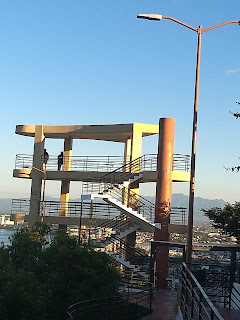 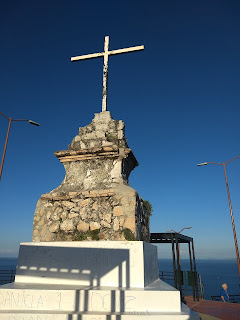 On December 24th, before catching a flight to San Francisco, I walked up the hill (“el cerro”) to the simple iron cross overlooking the bay.  On that cool morning, the early sun was only giving its light to a southern stretch of red tile roofs.  A few years ago I had watched burros trudging up and down the very steep hill carrying bags of cement.  This went on for months until an unnecessary double stairway and unnecessary viewing platforms had been built.  The primitive, cement trail that winds through trees and scrub still exists and I prefer it. 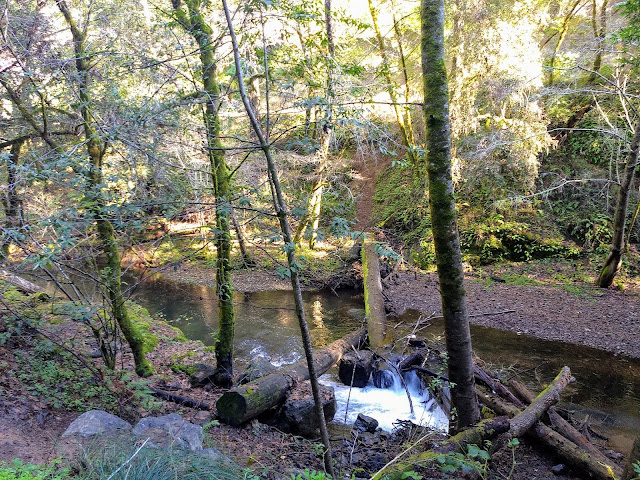 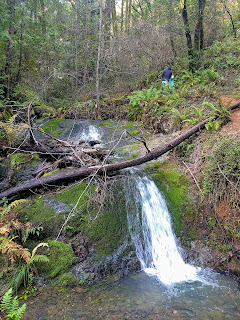 Marin County, California – Lagunitas Creek
“The woods are lovely, dark and deep…”
In San Francisco with family,  my favorite short excursion was to Marin County´s Lagunitas Creek, a 24-mile long stream that flows from Mt. Tamalpais to Tamales Bay.  The beautiful stream, winding through ferns, redwoods and other moss-covered trees, provides the largest spawning runs in the central California coast of the endangered Coho salmon.  We watched their occasional leaps and splashes as they forcefully swam, sometimes in pairs, upstream to spawn and to die.  Their descendants will make their way to the ocean, returning via magnetoception to their natal river,  continuing the cycle of life.

PORVENIR, NAYARIT: The Ameca river flows from el Bosque de la Primavera (“Spring Forest”) for 230 kilometers before it empties into Banderas Bay.  The river, whose mangroves are the natural habitat to crocodiles, separates the states of Jalisco and Nayarit.  With heavy rains, some crocodiles are washed down the river and into the bay.  Protected, they are captured and returned to the river.  Sometimes as I drive north over the Ameca bridge,  I think about that section collapsing during heavy rains at 2:30 in the morning about eight years ago.   I don´t remember how many cars went into the river – two or three – but there were no survivors.

On December 19th I headed north, crossing over the río Ameca and then turning east at Mezcales.  The morning sun shone brightly in my squinting eyes as I drove towards the foothills and Porvenir, the second small town after leaving the highway.  The trip took about an hour, and the clinic was already full at 8:30.  Volunteers reported pet owners had started arriving at the empty government building across from the plaza at 7 AM.  Because we had run out
of kennels, dogs were being

tranquilized as they were held or standing next to their owners.  Normally cats are sterilized before dogs, as it takes felines longer to come out of anesthesia. That day,  it was dogs without kennels first.

A tall, quiet young man arrived with three black Lab mixes, one of which was emaciated. The man said it was a street dog that had followed them in.  He agreed to sign for it, feed it after surgery and keep it overnight.

Linda Stewart, the very animated organizer of clinics in Nayarit, was holding an undernourished, young beige Chihuahua. At the clinic the day before,  the owner had given her one-year old dog to Linda.

STERILIZATIONS AT CLINIC IN PORVENIR:

DONATIONS AT CLINIC IN PORVENIR:  1,840 pesos

THE CLINIC IN PORVENIR WAS MADE POSSIBLE BY A GENEROUS GRANT FROM MARCHIG ANIMAL WELFARE FUND (Scotland).

CLINIC IN IXTAPA DECEMBER 12-15:  The following numbers were missing from the December 15 blog:

THE CLINIC IN IXTAPA WAS MADE POSSIBLE BY A GENEROUS GRANT FROM MARCHIG ANIMAL WELFARE FUND (Scotland).

DONATIONS TO PEACEANIMALS (THE OFFER OF A MATCHING GIFT UP TO $3,000 USD WAS MET!):

Mike Smith – $200 USD
William Goodloe – $25 USD
Connie Farion-  $289.50 x 5 months = $1,447.50 CA
Susan and Robert Barry – $1,800 (sponsors one clinic) Sue wrote:  “I´m a friend of Ofelia McHugh, PEACEAnimals board member, and am so impressed with your programs, spay/neuter clinics,  proactive approach and the mission to prevent animal suffering.  We have the sweetest little Chihuahua from Puerto Vallarta.  Kika is nine years old and a constant joy.  In fact, we have a neighborhood full of Chihuahuas, thanks to Ofelia and her mother Penny…”
Anonymous family foundation – $10,000 USD
Hadene Klassnik – $100 USD
Bo Jarnstedt – $50 USD
John Drum – $100 USD
Vallarta Adventures – Known for their excellent outdoor adventures, this is a philanthropically-minded company.  In addition to donating generously to our online auctions, Vallarta Adventures has been donating 5,000 pesos worth of vet supplies nine months a year since 2016. For an even a longer period of time, the adventure company has been supplying pet food on a regular basis to the local animal shelter,  which receives very minimal support from the government.

SHAKIRA THE XOLO – UPDATE: Her eleven puppies (the tiniest of the original twelve died a couple of days after birth) are now three weeks old and will be neutered and spayed at a PEACEAnimals clinic at approximately eight weeks.  There are four females – 2 hairless and 2 fluffy ones and 5 hairless males and 2 fluffies.  Mama Shakira, also for adoption,  weighs 15-17 kilos.  As her romeo is a German Shepherd, puppies will probably be a bit larger.  If interested in meeting/adopting, please contact LADRA via FB.  There will be adoption application forms to fill out.