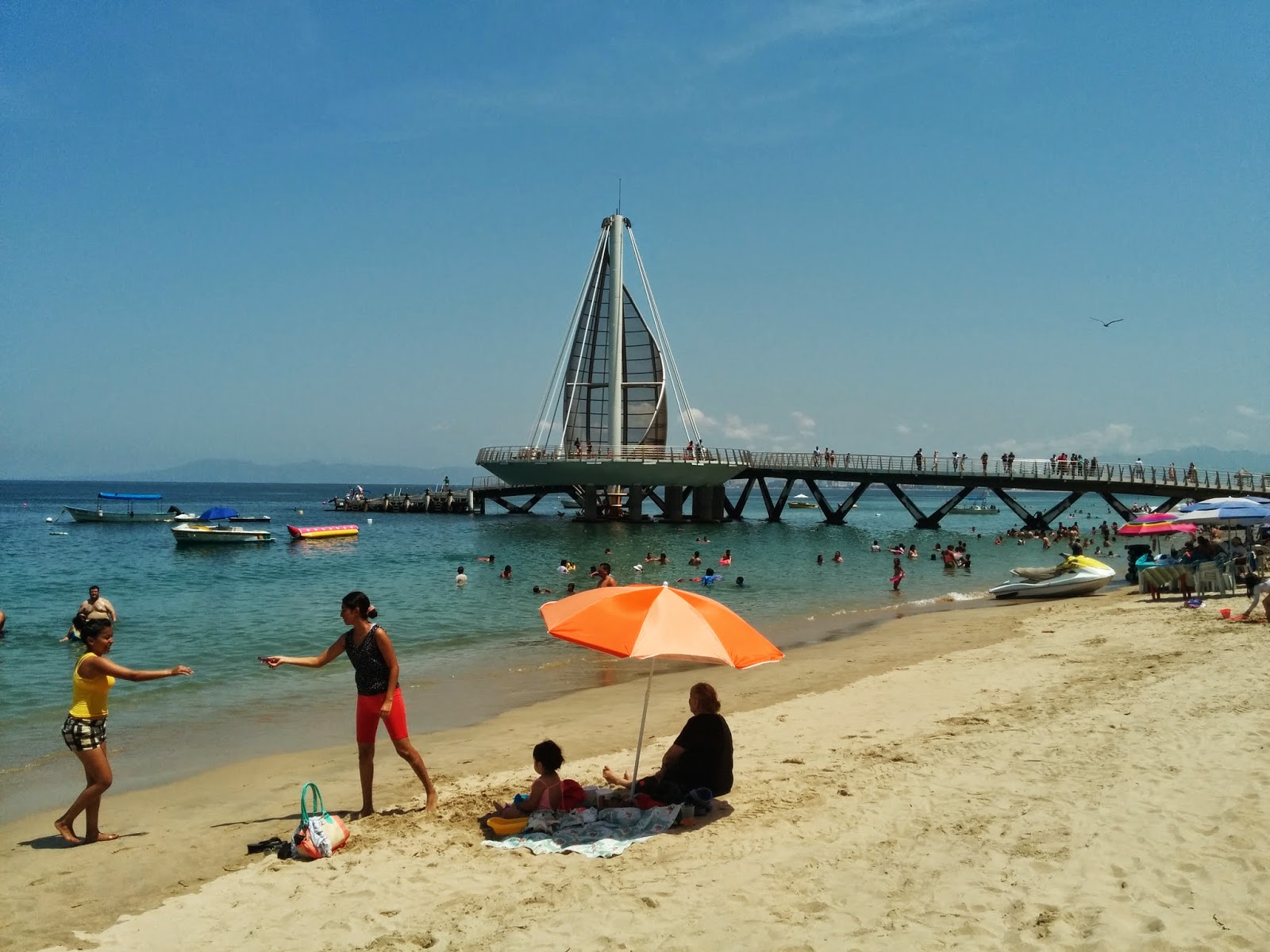 Some say that Los Muertos (“the dead”) beach was named because of a battle between the Indians and the Spaniards.  Others say that it because of drownings.  Our housekeeper´s cousin who came for a visit from Talpa a few years ago, drank too much one night , went for a swim and drowned.  A more likely explanation  for the name of this beach  is that long ago, a cemetery existed nearby.  There is a beach in Sayulita named los Muertos, and a cemetery is very close to it.  The bay is almost always very calm here for swimming and the beach is crowded, especially on Sundays, when locals go with their families.   La Palapa restaurant is a pleasant place to sit under an umbrella and enjoy brunch or lunch and then a swim.  Beach vendors are required to dress all in white, which prohibits the Huichol Indians from wearing their beautifully embroidered shirts and pants. Vendors, and there are many,  politely ask lunchers and beach goers if they would like to buy their wares –  silver jewelry, blankets, pareos, sombreros, hammocks,  Huichol beaded jewelry and wonderful, patterned handwoven bags adorned with pom poms , etc.   The “sail” on the newish pier looks great, especially at night, even though the lights that slowly change the colors aren´t working perfectly anymore.

To get to Coapinole, one drives through the busy municipality of Pitillal and then turns right towards the foothills of the Sierra Madres.  The colonia, close to the green hills, has a combination of dirt roads and paved roads.  All the roads have dogs on them.  The clinic took place in the home of Luna Castro and her husband Daniel, who made coffee, smoothies and fried bananas for the team and me.  The Castros had rescued a darling little Collie mix puppy who was spayed at the clinic.  She´s very playful, has been given the name “Barbi,” and needs a home.  Magdalena, who came later in the morning, cleaned surgical instruments and helped monitor cats in post-op.  Paulina, our director, is fostering a little white Terrier that Magdalena had rescued.  The dog had to have almost her entire body shaved because she had so much mange. Skin came off with the shaver, leaving the dog looking very tender and pink.  The Coapinole clinic was extremely busy, in part thanks to public service announcements on the radio and an easy location to get to.  After a very hot and humid morning, I bought a beautiful watermelon on my way home. 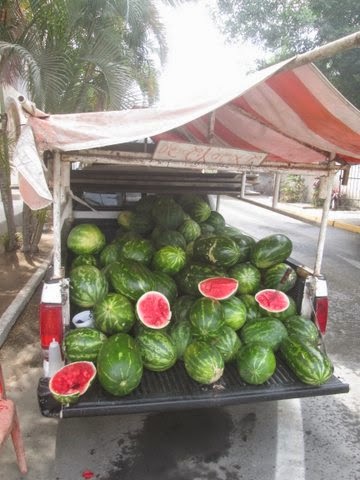 THE DOG THAT DIED:  “Spirit,“ who fought so hard to live, died on Wednesday.  Three months ago, the young brown male Cocker mix had been lying for three days on a steep incline next to a dirt road.  PEACEAnimals board members, Brischa and Ted Borchgrevink,  were e-mailed about the dog and its location and found him curled up in the area that had been described.  His hair was matted and he was filthy, emaciated and dehydrated.  His tail and one of his legs were fractured or broken and he had tumors on his genitals.    Taken immediately to Dr. Peña´s clinic, the rescued dog was diagnosed with TVT (transmissible venereal tumor), erlichia, anaplasma and fractures, the result of having been hit by a car at least once.  Days later, Brischa and Ted named this broken dog “Spirit,” because Dr. Peña said the dog had the will to live.  Spirit went home with Brischa and Ted.    His broken leg and tail and spirit mended.  Money was raised to pay for his vet expenses, including the chemo, which is so often and inexpensively successful in destroying malignant tumors.   Spirit ate well, was bathed regularly, ran and played with Brishca´s and Ted´s other dogs, swam in the pool, got pats and rubs and was loved.

On Wednesday after eating lunch, Spirit had a bath, was rubbed dry, cuddled, wagged his tail and lay down for a nap.  Under the bright sunlight and cloudless skies, Spirit closed his eyes and stopped breathing.  He had been able to survive everything but the chemo.  Spirit was buried that night in the hills behind Brischa´s and Ted´s home with a ball that he had liked to play with there.

TVT is avoidable.  The primary reason to spay and neuter is to prevent pregnancies.  It is also critical in the prevention of spreading venereal disease.  Spirit was a dog that might have had an owner once, but he had been discarded either before or after the injuries and disease.  Sterilized dogs don´t get TVT.  The mission of PEACEAnimals is to prevent the future suffering of animals.  Sterilization prevents future suffering.  Please take homeless dogs to free clinics.  Please consider donating to our clinics.

PEACE ANIMALS CLINICS OPEN at 9 AM Wednesday to Saturday, which is half-day only. Arrive early.  No food or water after midnight before surgery day.  Animals must be at least 8 weeks old.  They will be treated for parasites, fleas, ticks and mange, if it is present.  Pregnancies terminated on request.  Euthanasia performed if animal critically ill or injured.  All services are free.

From the Libramiento turn inland at Rio de la Plata (same street of the pedestrian bridge and the Red Cross). Drive down a couple of blocks until the end and turn right. At the first block turn left and you´ll find the clinic almost at the corner.

SPECIAL COLINA CLINICS:  Dr. Poli, Dr. Anthony and Paulina  worked the Colina clinic on Sunday, May 25th.  On Monday, May 26th and Tuesday, May 27th Dr. Poli and Paulina will be staffing the Colinia clinic.  The extra days are available because of donations made to Colina Clinic.

RIDES FOR RESCUE DOGS NEEDED:  For Edmonton, Calgary and
Vancouver.  Expenses for dogs paid for.  Please contact [email protected] if you can help.
HOMES NEEDED:  For the thousands of dogs and cats on the streets here and for dozens of healthy and beautiful dogs and cats at the Centro de Acopio, the city´s  no-kill pound. Open Monday-Saturday from 8 AM-2 PM.  293-3690. The Acopio is now holding adoptions every Saturday from 11 AM-2 PM at Plaza Caracól (back end of building near McDonald´s entrance).

RESCUED AND NEED HOMES:  Found weeks ago in the jungle and named “Muñeca,” this adorable two-year old female dog has not been claimed by her owner.   If interested, please contact:

SMILEAMAZON– When ordering on Amazon, if you click on the following link you can designate PEACEAnimals as a recipient of Amazon´s donation of  0.5% of your purchase.  http://smile.amazon.com/ch/20-3726038
GREATERGOOD – PLEASE CLICK!  Your daily clicks or direct donations help animals, people and the planet.  www.greatergood.org; www.greatergood.com  To donate to PEACEAnimals clinics, please click on this link.  http://bit.ly/1cWY0lP
VOLUNTEERS:  PLEASE SIGN UP WITH PAULINA STETTNER.  WE NEED  YOUR HELP!  [email protected]
Schedule, including directions and other miscellaneous information are always on website:  www.peaceanimals.org

PEACEANIMALS HAS TAX-DEDUCTIBLE STATUS IN THE U.S. AND CANADA.  Re Canadian donations:   NOBARS, a Canadian-based dog rescue organization, is able to process donations to PEACEAnimals without taking a commission.   Please contact: [email protected] or visit our website:  www.peaceanimals.org

AFTER ONE YEAR OF OPERATIONS, COST FOR ONE SURGERY WEEK CLINIC HAS BEEN REVISED UPWARDLY FROM $1,500 USD TO $1,700 USD.
THANK YOU TO OUR SPONSORS: