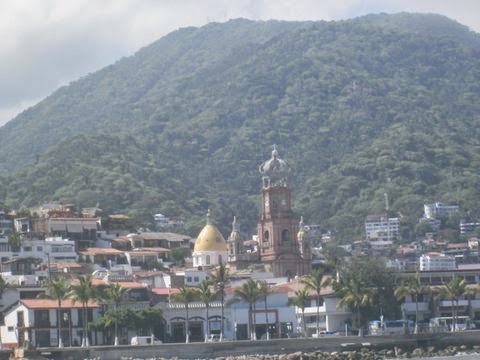 Rain!   Heavy sheets of rain and crashing electrical storms at night and some drizzly days.  The jungle is green and glistening and tufts of grass are shooting up between the multi-colored cobblestones.  On a clear day, a cruise south along the gorgeous coastline, passing the malecón, the Church of Our Lady of Guadalupe, villas, beautiful beaches and the “pirate” ship.  After an hour, we anchored at a small cove surrounded by dark rocks and boulders, where we snorkeled

in transparent blue-green water,  surrounded by exotic fish.  Temperature of the water:  86 degrees.

FIRST YEAR ANNIVERSARY:   Thursday, June 19th, marked PEACEAnimals´first anniversary.   Troy Valens, co-owner of Sea Monkey, treated the team, star volunteers and board members that were in town to dinner on the beach.  Brischa and Ted Borchgrevink brought “Negro,” a ten-year old Pit Bull that had been at the Acopio for a year .  He´s now waiting for a flight to his new home in Canada.  Paulina Stettner brought the beautiful male Belgian Shepherd she had found on the streets in colonia Ramblases.  The sad story is that the owner  left his two dogs locked up in his office, which he abandoned.  One of the dogs died of starvation, but the Belgian Shepherd somehow escaped.

He is now neutered, being treated for mange and for adoption.  At sunset, the sky had a greenish tinge.  Two hours later, we were running barefoot in an enormous downpour to our cars.  Numbers of sterilizations for the year will be published after I receive a report from Dr. Poli.  It has been a great year for the clinics.

Pitillal is a bustling municipality of Puerto Vallarta that seems like a separate town.  The main plaza, across from the pretty brick church, is almost completely devoid of trees,  and in the heat and humidity, devoid of people. 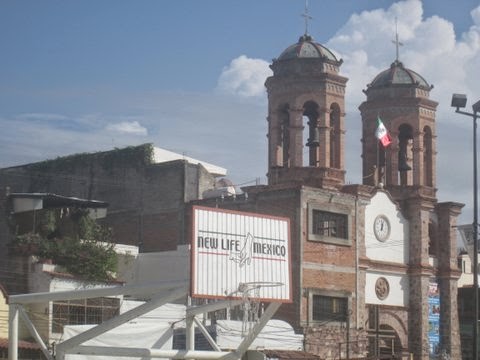 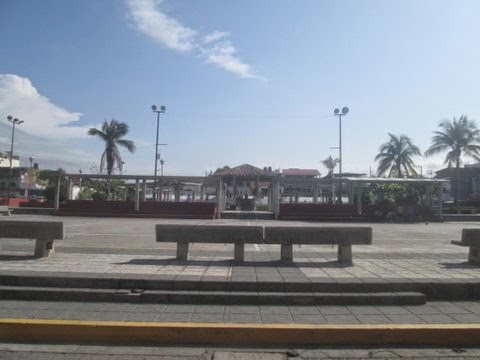 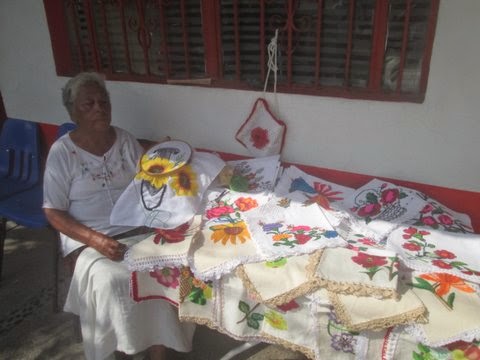 Per a passerby, the electronic gate to the the large underground garage at the plaza has been broken for months. On one of the sidewalks across from the plaza, two elderly women embroidered pillowcases and placemats for sale.  The clinic took place in the grass-covered courtyard of the delegación (government office where births are recorded, visas applied for, etc.) at the southeast corner of the plaza. 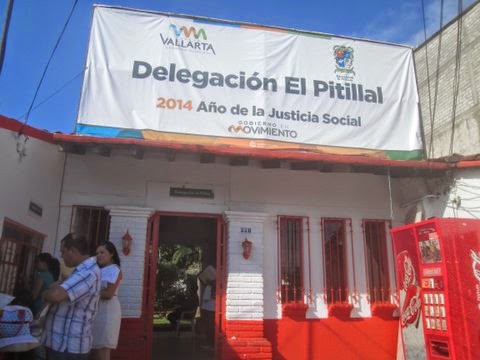 Even with several fans aimed at the vet team, volunteers and animals, it was very hot under the red Kiosko plastic tarp. 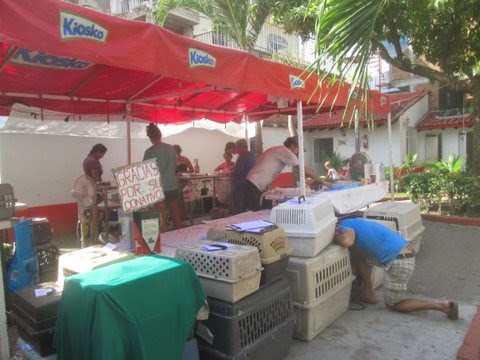 The clinic in Pitillal was paid for with a generous grant from the Summerlee Foundation.

DONATIONS TO PEACEANIMALS CLINICS:  “The Gift That Gives More,” a GreaterGood program, listed PEACEAnimals clinics as its recipient on the home page for three days.

On Friday, June 20th, 6% of the 180,200 clicks required to fund the sterilization of 53 cats and dogs had been counted.  This translates to 10,812 clicks for PEACEAnimals clinics.  By Monday, 63% of goal had been reached.   Waiting for final results from GreaterGood.

YOUTUBE:  If you haven´t seen the excellent five-minute video of a PEACEAnimals clinic, please take a look:  https://www.youtube.com/watch?v=93Eay9d3vG4&feature=youtu.be

“Kira,” the large black and white dog found under a car in a parking lot.  She was suffering from TVT and had multiple tumors, including one in an eye.   She was treated successfully with approximately ten sessions of chemotherapy, paid for with a donation from John Brooks, who lives in Newfoundland.

Kira´s rescuer, who was fostering her, asked me to find a place for Kira for ten days while he went out of town.   Kira went to LADRA, the dog boarding and sanctuary built and belonging to Brisch and Ted Borchgrevink.After being a paid boarder for one month (her rescuer didn´t return calls or emails),  Anselmo de Anda Martinez, who works as a caretaker at LADRA, fell in love with her.  So did his German Shepherd, Loba, who often visits the sanctuary.  Dogs and humans are very happy with this adoption.

“Don Alfonso,” a small black and white dog from the Centro de Acopio. 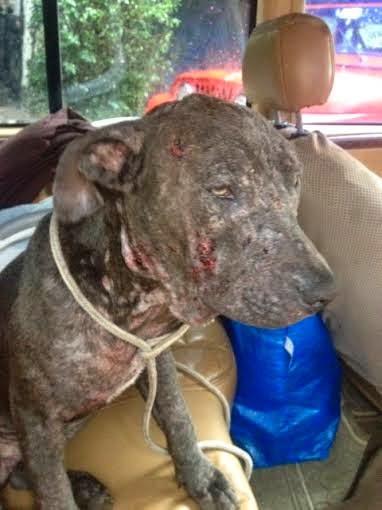 “Escar,” a male Pit Bull with a severe case of manage.  As Brischa and Ted Borchgrevink were leaving LADRA, a man with his dog flagged them down.  He said he didn´t have much money, but needed their help and would pay what he could to have his dog brought back to health.  Brischa and Ted put Escar in their car and took him to LADRA, where he will stay for at least a month.

“Pickles” was found by Brischa and Ted up in the hills with a nylon string around her neck.  Emaciated, dehydrated and sick, they nursed her back to health and although there were six offers of adoption, they said Pickles “brought too much joy to ever let her go.”  Pickles is a wonderful mix of Shar-Pei, Xolo (“Mexican Hairless”) and Pit Bull.  Lounging in the Borchgrevink´s pool, she looks like a happy hippo.

LADRA has rescue puppies and dogs for adoption.  Please contact via FB.

“Shanna,” a Pit Bull found starving on the street by Sofi Gonzalez.  She is approximately three years old, spayed, vaccinated and dewormed.  Sofi says she is very gentle and loves to swim, take walks and play.  This is a beautiful dog.  If interested, contact:  [email protected]

“Rommel,” the name Paulina gave to the Belgian Shepherd rescued on the street.  Neighbors said the owner who left him to die had called him “Romeo.”  The beautiful dog is not more than two-years old.  Contact Paulina if interested:  [email protected]

HOMES NEEDED: For the thousands of dogs and cats on the streets here and for dozens of healthy and beautiful dogs and cats at the Centro de Acopio, the city´s  no-kill pound. Open Monday-Saturday from 8 AM-2 PM.  293-3690. The Acopio is now holding adoptions every Saturday from 11 AM-2 PM at Plaza Caracól (back end of building near McDonald´s entrance).

RIDES FOR RESCUE DOGS NEEDED:  For Edmonton, Calgary and

Vancouver.  Expenses for dogs paid for.  Please contact [email protected] if you can help.

SOS RE ISLAND CATS:  There are basically only two people feeding about 60 cats and kittens and catching them to take to clinics.  Help is desperately needed to do both.  Contact:  [email protected]

SMILEAMAZON– When ordering on Amazon, if you click on the following link you can designate PEACEAnimals as a recipient of Amazon´s donation of  0.5% of your purchase.  http://smile.amazon.com/ch/20-3726038

VOLUNTEERS:  PLEASE SIGN UP WITH PAULINA STETTNER.  WE NEED  YOUR HELP!  [email protected]

PEACE ANIMALS CLINICS OPEN at 9 AM Wednesday to Saturday, which is half-day only. Arrive early.  No food or water after midnight before surgery day.  Animals must be healthy at least 8 weeks old.  They will be treated for parasites, fleas, ticks and mange, if present.  Pregnancies terminated on request.  Euthanasia performed if animal critically ill or injured.  All services are free.

On the highway, approx. 2 KM Carretera Punta de Mita
Delfin and the Highway – ocean side of street.  Easily visible
Almost directly across the street from Roberto’s Xcholtal Restaurant
Coming from Puerto Vallarta, the location is before the street light into La Cruz

Directions:
From downtown towards Costco on Francisco Villa turn right at calleVienna at (corner where there is a Pemex Gas Station. Follow paved road up toward mountains past Kiosco, OXXO, Farmacia
Benavides.  Keep going until the road dead ends and forces you to turnleft.  Once you have taken the turn, the street changes from Vienna to San Luis Potosi. –  Follow it through the first intersection . Clinic will be in the second house on the left #355.

Schedule, including directions and other miscellaneous information are always on website:  www.peaceanimals.org
PEACEANIMALS HAS TAX-DEDUCTIBLE STATUS IN THE U.S. AND CANADA.  Re Canadian donations:   NOBARS, a Canadian-based dog rescue organization, is able to process donations to PEACEAnimals without taking a commission.   Please contact: [email protected] or visit our website:  www.peaceanimals.org

COST FOR ONE SURGERY WEEK CLINIC IS APPROXIMATELY  $1,700 USD.
AVERAGE NUMBER OF CATS AND DOGS STERILIZED PER SURGERY WEEK IS 93.