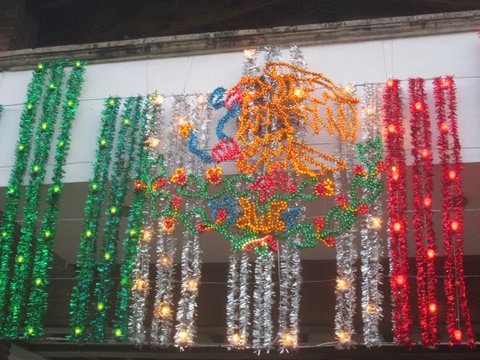 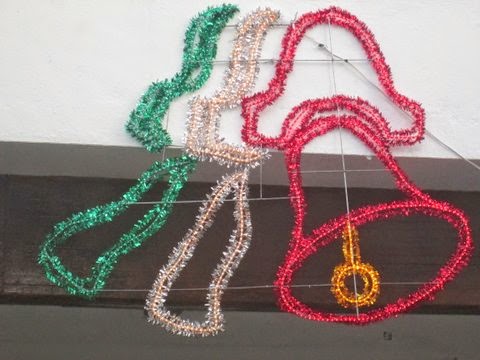 When we northerners see red, green and white bells with bows, we think Christmas and Jingle Bells.  And because we are accustomed to Christmas displays being put up in large stores as early as August,  i.e., Costco, many people living in or visiting Puerto Vallarta think the colorful, oversize bells are reminders to start shopping. 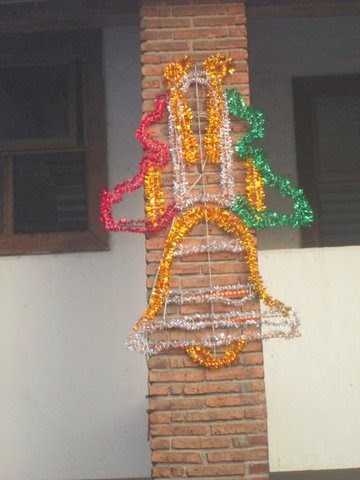 But no.  The bell decorations we see around town are in anticipation of September 16th, Mexican Independence Day.   In 1810,  Miguel Hidalgo, a Roman Catholic Priest, rang the bell calling for independence from Spain in the small town of Dolores, situated between Guanajuato and San Miguel de Allende.  It was, in a sense, the beginning of the Mexican Revolution, which took place one hundred years later.

Before the Revolution of 1910, most of the land in Mexico was owned by the elite ruling class.  After the revolution, the policy of land distribution was initiated.  In 1917, the Constitution´s land reform measures restored land that had been taken from communities, made land grants to villages and divided up large tracts of land called “latifundidios.”  The land was given to mostly the peasant class and used communally.  The distributed agricultural or empty land is called “ejido,”   and the practice of creating ejido land continued to the end of the 1930´s.  Limited title to work and use the land was given,  but did not allow for the sale of ejido land nor for it to be used as collateral.  This changed in 1992, when an amendment to the Constitution made it legal for communities and individuals to sell ejido land or to put it up as collateral for loans. 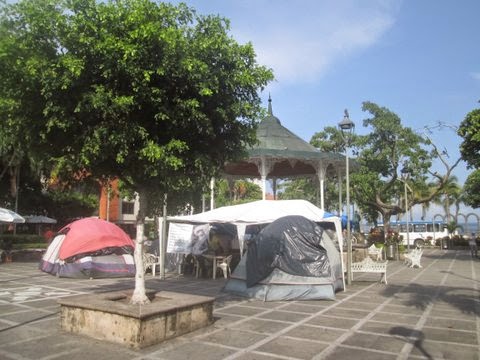 Adjacent to the former city hall, where the most bells are on display, is the Plaza de Armas.  The plaza (all plazas in front of city halls are named “Plaza de Armas”) is across the street from the malecón and in front of the Church of Our Lady of Guadalupe.

Camped out in tents for six months in this highly visible tourist location is a small group of people who say they are protesting the illegal sale by the current administration of ejido land near the central bus station.  A protestor I spoke with  said the situation has been “resolved,” and as soon as there is a signature on a legal document, the people will pack up their tents and leave the plaza, which has not been looking its best. 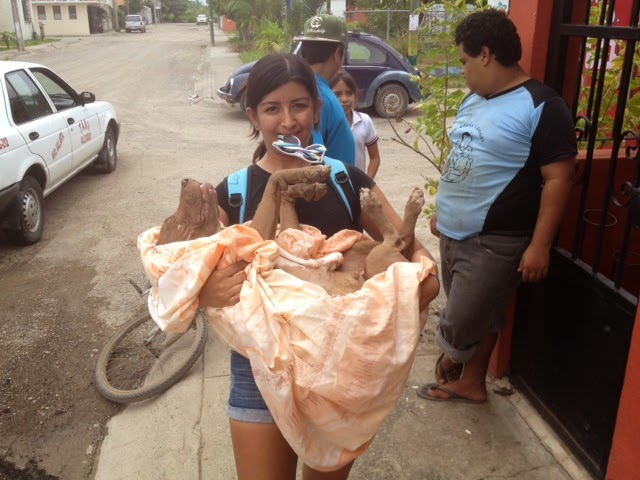 VALLE DORADO (“Golden Valley”) is located about 40 minutes south of centro Vallarta, just a few minutes northeast of Nuevo Vallarta in the state of Nayarit.  It is a colonia filled mostly with one-story cement houses and has the most most pockmarked roads I´ve ever seen.  Amanda Frederick Jimenez, a vet tech and her husband Fernando, a chef at Secrets resort, donated their home and also a couple of great meals.  Amanda said that on the first day, someone who wanted to be sure of a space for his pets, rang her doorbell at 6 AM. 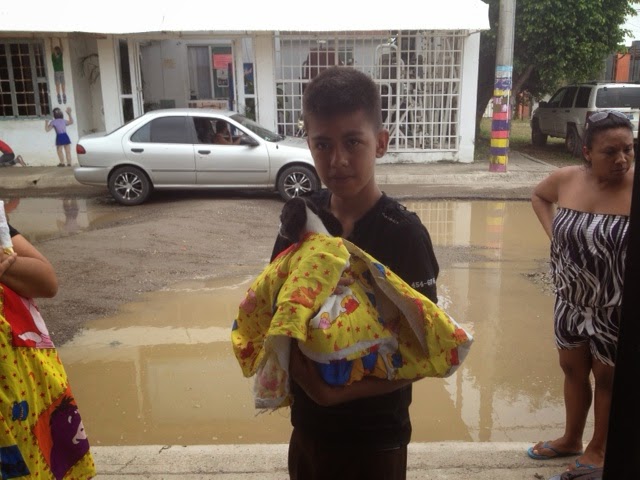 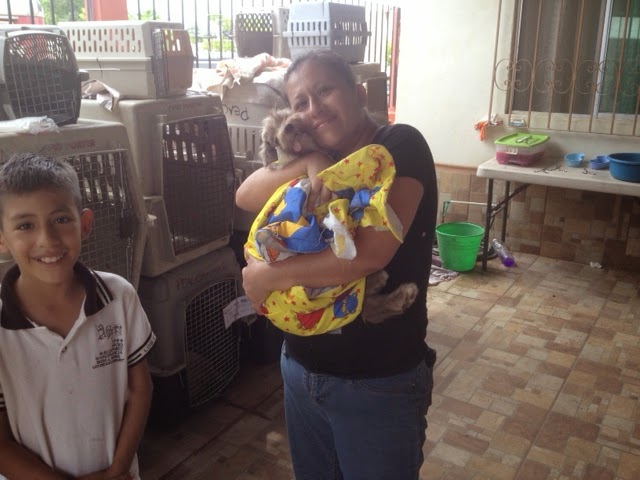 Every day was a turn-away day for pet owners even though the team was accepting more than 40 animals on the full surgery days.  Since the response and need so great, the team returns next week for a Wednesday-Saturday clinic. 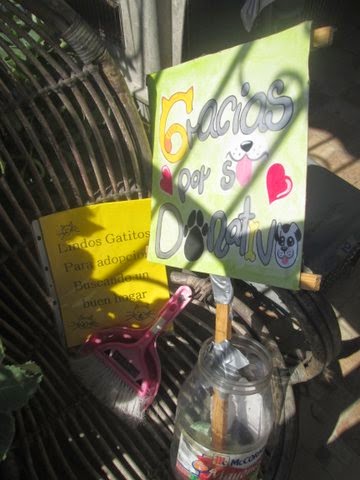 This is a record number for PEACEAnimals, and is the result of not only the great need in this colonia but also because we have a third vet, Dr. Jimena, on duty while Paulina Stettner is on leave of absence.  Amanda, who offered her home for the clinic, was able to help as a vet tech.

HOME!  “Santo”  age has been revised from two years to seven years by Lynda Lestz´s vet.  She describes Santo as a joyful and interesting dog who is able to do two short walks daily at his new home with her and her husband in las Juntas y los Veranos.

“Torta,” a thin,  one-year old female Pit Bull- mix found limping near Home Depot in front of a restaurant called “Tortas Ahogadas.” Barb Drucker and her husband Louis Drake talked to a restaurant worker who had seen the dog in the morning without burns on its face. The burns are undoubtedly the result of a restaurant owner´s or worker´s having thrown hot oil or boiling water at the dog. The vet said the dog was lucky not to have lost an eye.  The skin on one of her paws had also been burned off.  Cruelty to animals is now against the law here, but heartbreaking stories continue.   Barb and Louis are paying vet costs, but can´t keep her because they have six other dogs.  A foster and permanent home are needed as soon as possible.  Barbara says Torta is an exceptionally sweet and friendly dog.  Contact:  [email protected]

ISLA CUALE CATS:  Someone has been poisoning cat kibble near Oscar´s and Cuiza´s restaurants.  To date, two cats and one possum have died painful deaths. 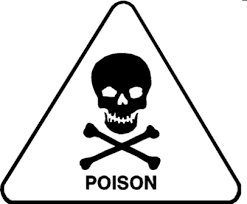 HOMES NEEDED:  For the thousands of dogs and cats on the streets here and for dozens of healthy and beautiful dogs and cats at the Centro de Acopio, the city´s no-kill pound.

Open Monday-Saturday from 8 AM-2 PM.  293-3690. The Acopio is now holding adoptions every Saturday from 11 AM-2 PM at Plaza Caracól (back
end of building near McDonald´s entrance) or Macro Plaza.  Please check with administration.   Dogs are walked twice a week by volunteers organized by Friends of Puerto Vallarta Animals.

SMILEAMAZON– When ordering on Amazon, if you click on the following link you can designate PEACEAnimals as a recipient of Amazon´s donation of  0.5% of some of your purchases.  http://smile.amazon.com/ch/20-3726038
SCHEDULE/HORARIO

will see a SAMs club on the left and an exit on the right. Exit across from the SAMs directly in front of the Chedraui grocery store. Drive five blocks east following the bus route of calle Valle de Mexico, then go five blocks to Valle Río Grande and turn right.  Drive two blocks south to calle Valle Hermoso.  Clinic will be on the right hand side at the end of this street.   IDAF gym/dance studio is directly in front of the house where the clinic is taking place.

September 24-27 – Palmar Haramara At the home of local animal advocate, Candace Shaw –  Calle Mar Blanco #475. Cross street is Oceano Indico – close to the square where Mar de Cortes and Mar del Sur boarding are, and the park which is very close to the market and IMSS. 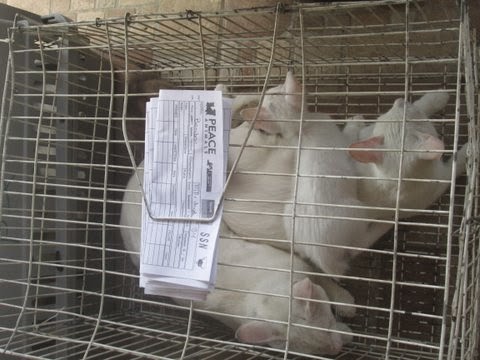 October 7-10 (TUESDAY-Friday)
Palmar Haramara  –  Calle Mar Blanco #475. Cross street is Oceano Indico – close to the square where Mar de Cortes and Mar del Sur boarding are, and the park which is very close to the market and IMSS.

Schedule, including directions and other clinic information are always on website: www.peaceanimals.organd on this blog:  www.gretchen-peace-and-pv.blogspot.com
WE NEED VOLUNTEERS AT THE CLINICS  While Paulina Stettner is on a leave of absence, please sign up with Dr. Poli:  [email protected]
If directions needed, please call him:  044 322 134 0942
COST FOR ONE SURGERY WEEK CLINIC IS APPROXIMATELY  $1,700 USD.