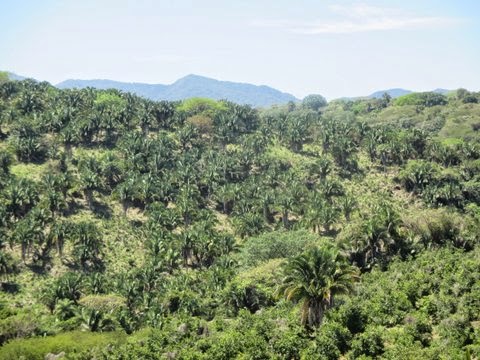 We left in the morning on a small adventure.  We were going to see the 5,000-year old petroglyphs of Alta Vista, which are among the oldest in all of Mexico.  After going through Bucerías, highway 200 becomes a winding, two-lane road,  passing the popular surfing town of Sayulita and a few minutes north, the quiet town of San Pancho.  The road then becomes straight and smooth,  with a string of colorful fruit stands on the right hand side. 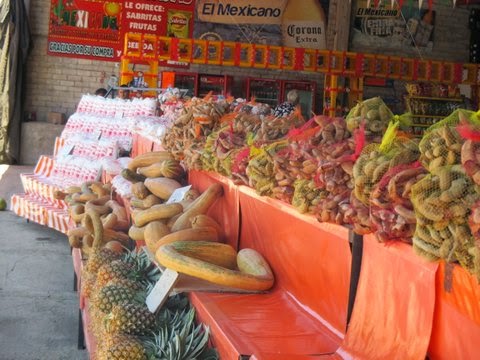 We stopped to buy a five pound bag of sea salt for 30 pesos ($ 2 USD) and some coconuts for their milk and meat.  Almost two hours after leaving home, we arrived at the sign that says “Alta Vista,” which is a hillside village between the coastal towns la Peñita and las Varas.  The road that slowly rises up the hill is paved and there are no signs indicating where the petroglyphs are.  If one goes as far as the dirt road, as we did, the turn-off has been passed. We turned back, and took a rocky dirt road to a cluster of enormous mango trees heavily laden with ripening fruit, parked, walked to a barbwire fence and began our descent to the arroyo, 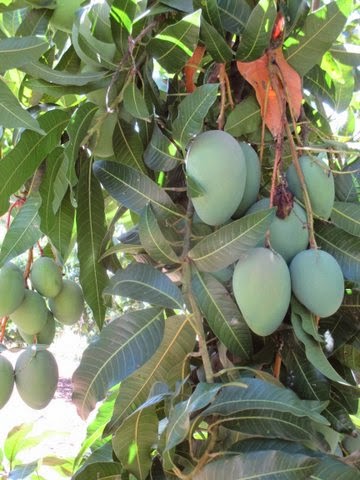 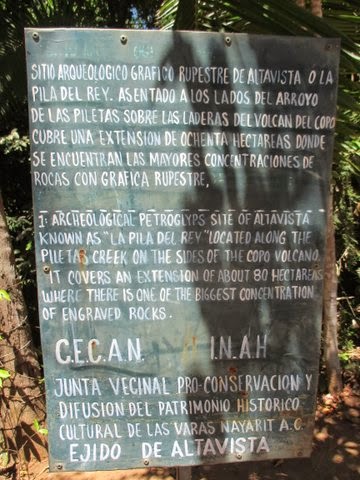 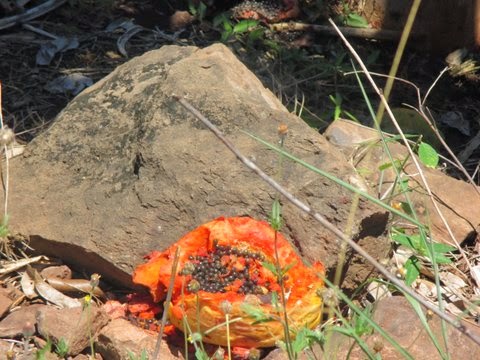 acres of fruit orchards – mango,  guayanaba and papaya – with a view of a 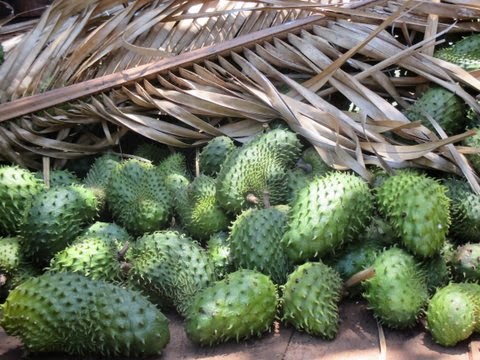 spectacularly beautiful tropical forest on the hills across from us.  At the arroyo, which was almost dry, we turned to the right and followed it until we came to the spot where we saw the first petroglyph and where an older gentleman wearing a white baseball cap and carrying a rake approached us.  As guardian of the petroglyphs, he collected 20 pesos each from us and advised that there was water further up the boulder-lined trail.  A series of signs written on tin in English and Spanish along the path give an interesting history of the area. 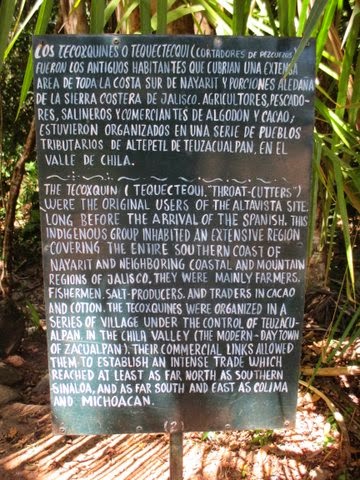 After a fifteen or twenty-minute gentle ascent,   we arrived at series of rock shelves that the stream flows over, forming pools of water at different levels.  It was a hot day, so we took a dip in the deepest pool and stayed for some time, watching butterflies overhead and listening to 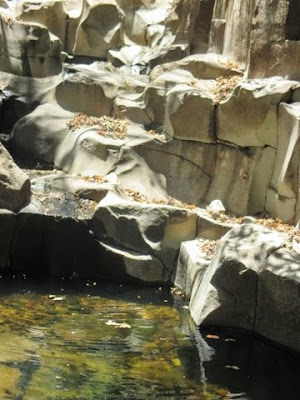 the whooshing, wind-like sound the palm fronds made as they brushed up against each other. 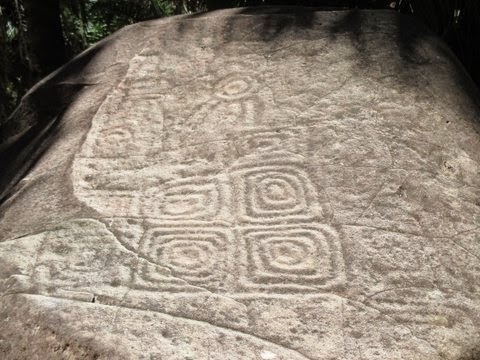 The Tecoxquines had carved religious symbols into the volcanic rock lining Lapiletas creek in approximately 2300 BC.  After the Spaniards arrived in the early 16th century, the Tecoxquines completely disappeared, victims of disease and forced labor.  There are more than 2000 carvings covering more than 200 acres in Alta Vista, 70 of which visitors can see without too much trouble.    The Huicholes, an indigenous people known as the “healers,” sometimes visit this sacred place to perform ceremonies and leave offerings to their gods.

For some excellent information and a map, which I wish we had looked at in advance:   http://richardlawhorn.com/altavista/pila_del_rey.html 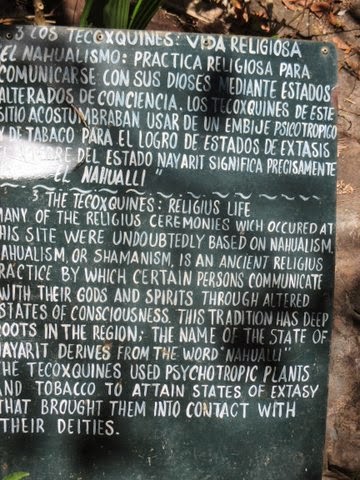 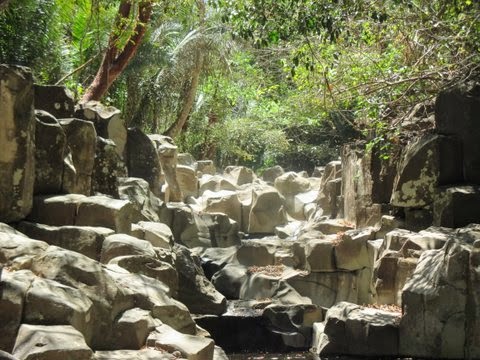 Colonia Loma Bonita is an inland neighborhood approximately twenty-five minutes northeast of centro Vallarta.  The roosters will still crowing there when I arrived shortly after nine in the morning on Thursday.

The dirt roads are dusty now, as there has not been any rain for a couple of months.  The clinic was  in the ample downstairs open-air space of a home belonging to the family of the boyfriend of our vet tech and education director, Leslie Carrachatea.   Leslie said she had met a some of the parents of children who had told them about the clinic after being at her school presentation.

As in almost every colonia we visit, there were dogs on every street, chained up dogs and dogs well cared for in enclosed spaces.  As we had space for five more animals on Thursday, I walked a few blocks knocking on doors asking if there were pets that needed to be sterilized.  One nice family had six Chihuahuas and one Pug in a fenced in area and a chained up female Pit Bull.  The dogs were all safe, but none were sterilized and he said none would be.   An attractive man on his work said he would run back home to get his two dogs, and did.  Two pretty young girls living in their squalid family home, managed to catch one of their female cats.  They were unable to capture the frantic male, so a kennel was left with them for Friday´s  clinic.   An unfortunate man missing his front teeth pushed a bicycle around collecting large black bags of plastic.  An Australian-mix breed dog chained to the bike panted next to him.  She had had a litter a few months before, and even though the man followed me to the clinic, he said he wanted his dog to have more puppies.  The man left without letting his dog have a drink of water.

ADDENDUM:  I failed to note terminated pregnancies at the clinic in San Vicente April 29-May 2:
1 dog with 5 fetuses; 1 dog with 4 fetuses; 1 cat with 3 fetuses

This clinic was made possible by the generous grant of $5,000 USD by the Marchig Animal Welfare Trust, which is headquartered in Scotland.
DONATIONS AT CLINIC in COLONIA LOMA BONITA:  1,300 pesos

Total amount raised was $2,050.  GoFundMe keeps 7.9% plus $.30 per donation.  The clinic will take place at Candace´s, who is a board member of PEACEAnimals.

Chris Vietor very generously hosted drinks, taquitos and three fantastic groups of musicians to play for a small benefit at his wonderful terraced penthouse on the beach Friday night.  Guests stayed until midnight and donated a total of 12,300 pesos.  This money will pay for the sterilization of approximately 42 cats and dogs.
Kelsie Macray – $319 USD – which represents $1.00 for every dog collar or leash sold by her company.  All accessories are handmade in Los Angeles – www.beastandbabe.com  The $1.00 is what it costs PEACEAnimals to treat every cat and dog for ticks, fleas, parasites and mange, if present.  Thanks to Kelsie, 319 dogs and cats have been treated this past quarter.

The mission of PEACEAnimals is to prevent the suffering of animals. We reduce, but do not eliminate, the suffering of animals by sterilizing approximately 4,000 cats and dogs annually.  Many thousands of kittens and puppies are born here every year, and an enormous number are born to starve, become diseased, injured or killed by vehicles and often become victims of abandonment and abuse.   Please contact any or all of the animal rescue organizations if you need help for an animal or would like to adopt one.  That list is on our website on the “resource” tab. 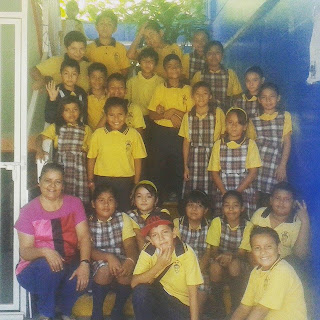 EDUCATION PROGRAM!  Leslie Caratachea, our new vet tech and education director, visited the José María Morelos y Pavon school in the colonia of Loma Bonita on Monday in advance of our clinic.   Leslie presented a program regarding treatment of pets, wild animals and the environment to a total of 137 children. Our expectation is not only that the children bring in family pets, but that they teach their parents and siblings what the have learned.  Thank you to the school´s principal, Liliana Oseguera, for giving us permission to visit.

IMPORTANT NEW PET LAW!!!  Requires that all pets be sterilized after the age of eight weeks.  To not comply with the law means a fine of 5,400 pesos.  This information is being given out by our education director at schools and at our clinics.

Three months ago Fernando Verduzco rescued a starving five-month old male Boxer from the streets.  The beautiful dog has been brought back to health and needs a great home.  Please contact Fernando via Facebook if interested.

“Ganache,” the young male tuxedo cat I found on the street is now being fostered at Puro Gato.   This is a great cat. Please contact Puro Gato via FB if interested.  Puro Gato also has 23 young kittens at the shelter that need homes. 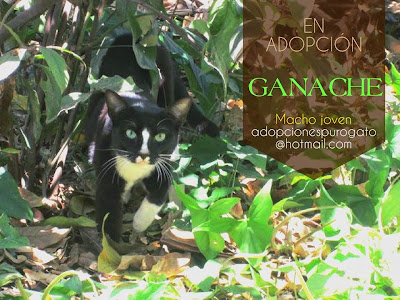 DESIGNATED LINE WITH ADDRESS AND DIRECTIONS FOR WEEKLY CLINIC (SPANISH ONLY)   (322) 113 3955
HOMES NEEDED:  For the thousands of dogs and cats on the streets here, for hundreds of cats and dogs in refuges and in foster homes,  and for dozens of healthy and beautiful dogs and cats at the Centro de Acopio, the city´s pound.
Please check our website on the “resource” tab for names and contacts of refuges, vets, etc.
Dogs at the Centro de Acopio are only walked twice a week by volunteers organized by Friends of Puerto Vallarta Animals.  Food is always needed. The government contributes two weeks of food annually.
FOSTER HOMES ARE NEEDED FOR CATS AND DOGS.  PLEASE CONTACT THE ANIMAL RESCUE ORGANIZATIONS ON OUR WEBSITE IF YOU CAN HELP.
RIDES FOR RESCUE DOGS NEEDED for Edmonton, Calgary and Vancouver.  All expenses for dogs paid for.  Please contact MEXPUP or NOBARS –  [email protected]; [email protected]
GREATERGOOD – PLEASE CLICK!  Your daily clicks or direct donations help animals, people and the planet.  www.greatergood.org; www.greatergood.com
To donate to PEACEAnimals clinics, please click on this link.  http://bit.ly/1cWY0lP
SMILEAMAZON– When ordering on Amazon, if you click on the following link you can designate PEACEAnimals as a recipient of Amazon´s donation of  0.5% of some of your purchases.  http://smile.amazon.com/ch/20-3726038
SHEDULE/HORARIO
MAY:

13-16 – Calle Mar Blanco # 475  Colonia Palmar de Aramara
Home of Candace Shaw- memorial clinic for her dog Sterling, who was poisoned in a nearby park

Directions:  Cruise Ship Marina /Sam’s/Walmart right on Prisciliano Sanchez at
1st traffic light right on Oceano Pacifico, go 4 blocks pass the IMSS hospital & at the  park on the left, turn right on Mar Blanco, 1/2 block down on the right #475

27-30 – Colonia Volcanes – at the local community center where free English and computer classes are given.  Megan Jane Shelton, who organizes and teaches this program,  requested this clinic and will secure donations of lunches and funds to cover the extra gas and driving time for the vet team. 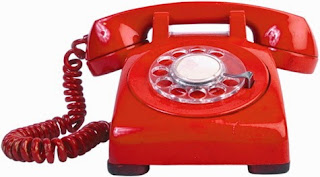