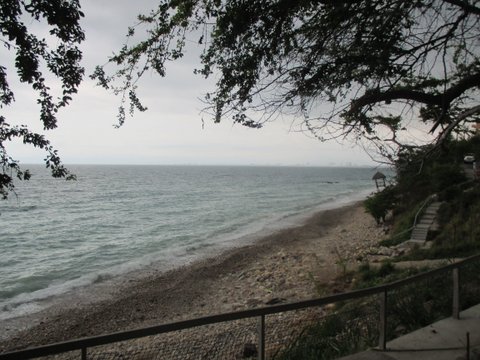 During the last two weeks of oppressively high temperatures and humidity, we finally turned on the ac in our bedroom on two different nights.   The first night was when I sat downstairs at my desk at ten o´clock with the fan blowing warm air on my face.  I checked the weather on the internet –  88 degrees with 70 percent humidity –  and succumbed that night to the unwelcome heat wave.  Hurricane Blanca, blowing hard in the Pacific next to La Paz in Baja California, brought high waves to Puerto Vallarta.

Large stones were thrown against and over the malecon, knocking down capstones,  dragging sand out into the bay and blanketing beaches with rocks.  Surfers were thrilled with the six meter high waves. 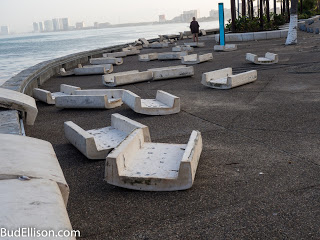 The longed for rains arrived a few days ago, breaking the heat and humidity.  Puerto Vallarta is extremely beautiful with blue skies and blue-green bay.  It is as beautiful when the skies are grey.  The intense greens of the jungle and the flowering trees,

especially the framboyan with its deep orange blossoms, are in dramatic contrast with the sky and sea.  The libramento, also known as the “tunnel road,” has several of these gorgeous trees, known as “flames of the jungle.”

I got out the car to take a picture of one of them, and was as pleased and surprised to see the burro standing under the framboyan as I would be to discover a beautiful church once I had turned a corner on a forgotten street. 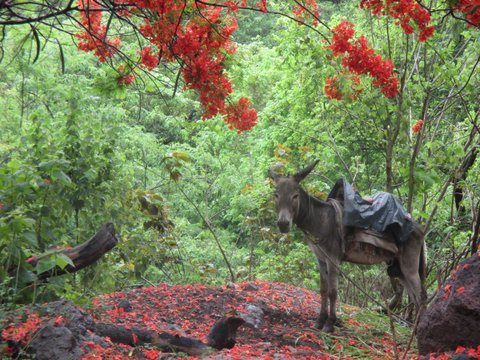 COLONIA PALMAR DE PROGRESO is about a thirty-minute drive northeast of centro and filled with cinder block stores and homes.  A ranchero wearing levis a wide-brimmed hat rode by on his horse as I arrived at the location.

The clinic took place in a donated empty storefront next to a small convenience store that was selling frozen juices in little plastic bags.  Fans strategically placed in the room helped keep the animals and people at bearable temperatures.  I was there when a woman in bright pink brought in a small, shaggy white dog that she thought might be pregnant.

The little dog had already given birth to six litters, and each time two or three of the puppies were born dead.  There was no more space on Thursday, but after explaining that it was for the dog´s health and to avoid the future suffering of the puppies the dog would give birth to, the owner said she would return the next morning with the the dog plus three others.

All pet registration forms with signatures of owners or rescuers are submitted by Dr. Poli to the local department of health, with copies to PEACEAnimals.
DONATIONS AT CLINIC in Palmar de Progreso – 1,180 pesos 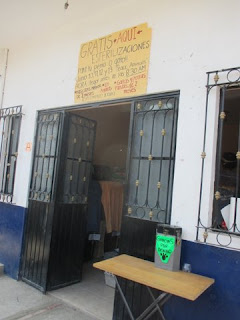 EDUCATION PROGRAM:  Leslie Caratachea presented to 123 teenagers at Secundaria Forarrea Antonio Caso Andrade in the nearby colonia of Magisterio.

RESCUED AND ADOPTED:  Kathy and Clark Waycaster found a beautiful female Australian Blue Heeler in Sayulita and took her immediately to a vet.  Infested with ticks and fleas,

she tested positive for erlichia, but otherwise is very healthy and estimated to be 1 1/2 years of age.   Sara of SayulitAnimals contacted Michel Loyd, who lives in nearby San Pancho.  Michel adopted the sweet dog two days after being rescued and will have her spayed.

Soraya of Puro Gato found an abandoned female Pit Bull by the pedestrian bridge on the tunnel road and found a good home for her with the owner of the nearby chicken stand who had been feeding the dog.  The dog will be spayed at a free clinic. 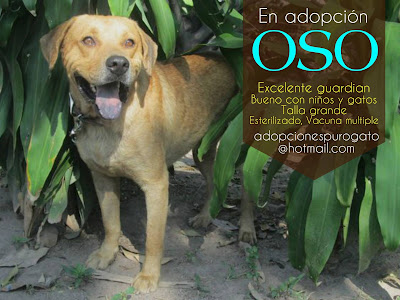 RESCUED AND NEEDS HOME:  “OSO”is a three or four year- old Lab mix and weighs almost 30 kilos.  Soraya met him at a PEACEAnimals clinic in April. Because Oso was looking for food in garbage heaps and was at risk for being poisoned and was suffering from mange, Soraya took him home with her.  Oso is neutered, cured of manage and healthy.  Soraya says he is a smart and loyal dog,  gets along with other dogs, children and cats, and will be a protective companion.  If interested, contact Soraya via Puro Gato page on FB.

EXTRAORDINARY ATTEMPTED RESCUE:  I wish this story had had a perfect ending.  Hilary Blythe Cymoszinski emailed PEACEAnimals a couple of weeks ago saying that she had been traveling in Mexico and seen a sweet and sad looking black female Pit Bull outside the main bus station in Guadalajara one night.  Hilary was unable to take the dog with her at that time.   Back home in Los Angeles, she emailed me again, saying that she had 36 hours in which to find the dog and give her a better life.  Hilary then took a red eye flight to Guadalajara, arriving at dawn this past Saturday.  She and her friend Prabhakaran spent four hours walking the grid  and showing the dog´s photo to taxi drivers and vendors at the bus station.    One person said he had seen the dog collared and taken away a few days before.  The main pound was closed and dogs don´t survive there for more than about three days.  Hilary and Prabhakaran visited a small refuge and decided on a mini-Dobi to adopt.  When Prabhakaran went back on Tuesday, the dog had been adopted, along with a couple of others.  And that is the happy ending for those three dogs.  The black Pit Bull may not have had the same good fortune.  Prabhakaran is now trying to help Cheryl Russell, who had also emailed PEACEAnimals from Guadalajara.   Cheryl had noticed a friendly dog near Walmart several times and is now trying to locate the dog,  take it to a vet and then to Canada.

POUNDS – The usual way to kill cats and dogs in Mexico is by electrocution.  Other means also used include drowning, strangling, hanging, shooting and poisoning.  Our pound is currently a no-kill one, with the few exceptions of vicious dogs or animals too critically injured or ill to save. The staff at the Acopio (pound) has gone to great lengths to save all sick animals, including those suffering from distemper.  Cats and dogs that cannot be saved are euthanized, which means “good death.”   The sadness at the Acopio is seeing dogs that have been in cells or chained up outside for as long as two years.  They are only walked twice a week and no one has time to give them the companionship and exercise that they crave and need.  Please consider visiting our Centro de Acopio and adopting a cat or dog. 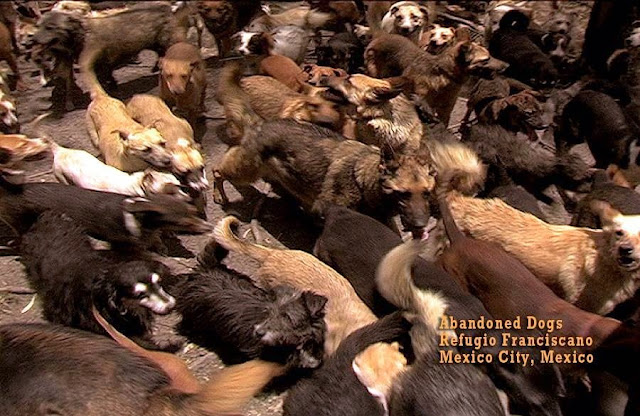 DIRECTORY OF RESCUED ANIMALS created by Mateo Jorge – for a three-minute tutorial: https://www.youtube.com/watch?v=wfJvn1wTkWs
http://gooddog.pw/my-account/
DESIGNATED LINE WITH ADDRESS AND DIRECTIONS FOR WEEKLY CLINIC (SPANISH ONLY)

(322) 113 3955
HOMES NEEDED:  For the thousands of dogs and cats on the streets here, for hundreds of cats and dogs in refuges and in foster homes,  and for dozens of healthy and beautiful dogs and cats at the Centro de Acopio, the city´s pound.
Please check our website on the “resource” tab for names and contacts of refuges, vets, etc.
Dogs at the Centro de Acopio are only walked twice a week by volunteers organized by Friends of Puerto Vallarta Animals.
Food is always needed. The government contributes two weeks of food annually.
FOSTER HOMES ARE NEEDED FOR CATS AND DOGS.  PLEASE CONTACT THE ANIMAL RESCUE ORGANIZATIONS ON OUR WEBSITE IF YOU CAN HELP.
RIDES FOR RESCUE DOGS NEEDED for Edmonton, Calgary and Vancouver.  All expenses for dogs paid for.  Please contact MEXPUP or NOBARS –  [email protected]; [email protected]
GREATERGOOD – PLEASE CLICK!  Your daily clicks or direct donations help animals, people and the planet.  www.greatergood.org; www.greatergood.com
To donate to PEACEAnimals clinics, please click on this link.  http://bit.ly/1cWY0lP
SMILEAMAZON– When ordering on Amazon, if you click on the following link you can designate PEACEAnimals as a recipient of Amazon´s donation of  0.5% of some of your purchases.  http://smile.amazon.com/ch/20-3726038
SHEDULE/HORARIO
JUNE 17-20:  Colonia Villas del Puerto –  Calle Faro #526  esq-  Yelapa.
Se va camino a Sams, da vuelta a la izq. entrando por la aurora, llega a la glorieta,  sigue y lugo vuelta a la izquierda por donde se van los camines.

Thank you to Jhovanee Monge for this location.