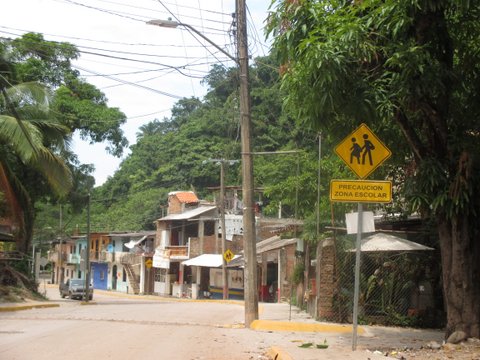 The very deeply rutted dirt portion of the road in colonia Paso Ancho to the colonia of Paso Guayabo from was usually either a hazardous dusty or hazardous muddy ride, depending on the time of year.  That stretch of the road is now paved,  so the only bumps on this 15-minute ride from the libramiento (tunnel road) above centro to Paso Guayabo are on the cobblestone sections. 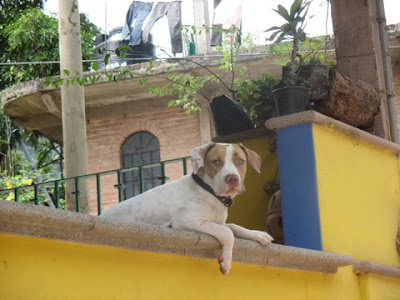 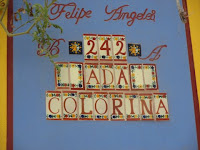 On Thursday we drove along the río Cuale, passing through colonia Buenos Aires where Brischa and Ted Borgrevink´s B & B, Hacienda las Ánimas is.  Colonia Paso Ancho (“wide crossing”) a couple of miles further east, is where the very popular artist, Ada Colorina has her home and studio.  It´s also where one can rent horses next to the white iron bandstand at the river and ride up to a perfect swimming hole in the río Cuale.

A small waterfall splashes down from the high hill next to the cobbled road before one reaches the high, double stone arches of the ejido land of Paso Guayabo (“nostalgic crossing”).  It´s there, next to the river, where we love to have a very good lunch under a palapa roof at Paraiso Moro. 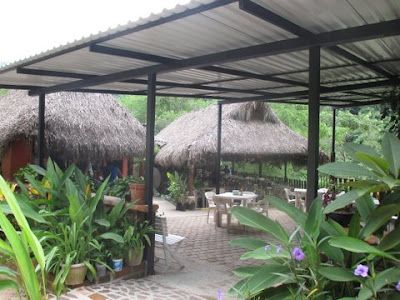 A few wooden steps lead down to the grassy riverbank,  where one can wade across to a deeper, faster section of the river to sit with a lemonade, or something more exciting,  in the cool water. 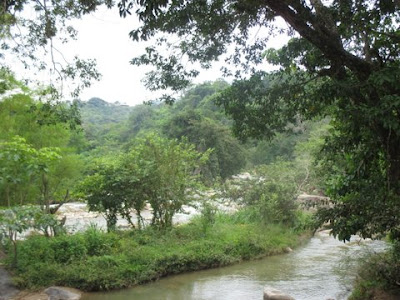 Friday – at seven in the morning it is still dark.  At 7:15, one puffy cloud on the horizon is faintly lit by the sun, which is hidden behind the foothills of the Sierra Madres.   It feels hot.  I check the weather report – 79 degrees and 95% humidity.  No rain until night.

NEW FOR VALLARTA: Arturo Dávalos, member of the Citizens Movement party, was sworn in for his three-year term as mayor (mayors are called “presidentes” in México) on September 30th.  Garbage collection hopefully is at the top of his agenda for the city.

All pet registration forms with signatures of owners or rescuers are submitted by Dr. Poli to the local department of health, with copies to PEACEAnimals.
DONATIONS AT CLINIC IN MEZCALITOS: 560 pesos

LAS ARALIAS is a colonia PEACEAnimals has visited several times.  It´s about a mile to the east of Costco, so very easy for many people to get to.  On Wednesday, Benedicte Laur, the French owner of the lovely Casa Malia brought a neighbor´s cat plus two tame female street cats from Gringo Gulch and stayed to volunteer.

I brought a six-month old beautiful male Siamese cat for neutering that Shannon Beston had rescued (she has three more white rescue cats for adoption) and one of the two little male tabby kittens that I had found a home for after it was brought to me in a parrot cage with its mama and three siblings.

After I left for California, the calico mama unfortunately disappeared.  She´ll get pregnant somewhere again soon.

A small team of  attractive, smiling Mexican women brought in rescued cats and dogs, helped with registration and post-op and donated a delicious ceviche lunch to the team.

On Saturday, I returned to the clinic at 9 AM with a neighbor and his dog Becky for spaying.   After forty-five animals were registered,the vets asked that no more be accepted.

At 10 AM, an exception was made for a very pregnant black and white cat that had just been found on the street.  The woman who collected her hoped the cat wouldn´t run away after she took it home.

STERILIZATIONS AT CLINIC IN LAS ARALIAS September 30-
October 3:Male dogs:  20; Female dogs: 44; Male cats:  20; Female cats: 38  PLUS one pregnancy terminated for a cat with 5 fetuses
and one euthanasia of an animal too ill to be saved.

Amount of peso donations not yet received.
DONATIONS TO PEACEANIMALS:

Alice Morgan Wright-Edith Goode Trust – $3,600 USD  grant confirmed 9/30 via the Humane Society.  This amount will pay for two clinics, resulting in the anticipated sterilization of more than 200 cats and dogs.

EDUCATION PROGRAM:  Leslie Caratachea, vet tech and director, made a presentation this week to 89 students in the Juan Rolfo school in colonia Arboledas.

ADOPTED AND IN HIS NEW HOME:  “Rabbit,” an 8-month old male white Great Dane that is deaf and blind.  After being fostered for several weeks by Gaby Garcia, manager of one of Troy Valens´and Ron Thomas´restaurants (Cheeky Monkey and Sea Monkey).

Troy flew to Mexico last week-end and returned to his home on the Oregon coast with Rabbit on Thursday. Rabbit will join seven other rescue dogs belonging to Troy and Ron, including a three-year old white female Great Dane named Bunny,  who is also deaf and blind.  Troy liked the idea of “Bunny & Rabbit” for the names of these two dogs.

RESCUED AND NEED HOMES:  Soraya of Puro Gato saw a small female dog in Olas Altas last week that that apparently been hit by a vehicle.  The dog´s left eye was bulging out of its skull and it was obviously in great pain.  Soraya  took her to Dr. Tamayo, who confirmed that two bones had been broken in one of her back rear paws.  The dog´s eye was impossible to save, and so was extirpated the following day.

Soraya of Puro Gato is fostering this 18-month dog, whom she describes as “very sweet and thankful.”  She has named the dog “Malibu.”  If interested in adopting this dog, please  contact:  Puro Gato – FB.

PERMANENT AND FOSTER HOMES NEEDED:  For the thousands of dogs and cats on the streets here, for hundreds of cats and dogs in refuges and in foster homes,  and for dozens of healthy and beautiful dogs and cats at the Centro de Acopio, the city´s pound.    The Acopio is open Monday-Saturday from 8 AM-2 or 3 PM.  Local phone number:  293-3690

“Snowflake,” the little white kitten in the photo below,

was rescued from the street.  Dr. Tamayo treated her for a respiratory infection and advise she had suffered a skull fracture, resulting in some brain damage.  She is playful and sweet, but cannot protect herself from children, dogs or cats that play roughly.  Snowflake is a beautiful kitten and waiting for a perfect home.  Contact:  [email protected]

On Friday, I took one of the very large bags of donated hand towels from The Fit Club to the Acopio (the other was for our clinics).  The improvements from years ago have been enormous, but there are still loads of animals waiting for homes – approximately 70 dogs, 1/3 of which are Pit Bulls.  The cat population is much smaller, and ranges between 12 and 20 in any given week.  Please visit the Acopio if you would like to adopt a dog or cat, and  don´t be discouraged by the bad road.  The Acopio is about a 10 or 15-minute drive east of Costco.

Please check our website on the “resource” tab for names and contacts of refuges, vets, etc.
DIRECTORY OF RESCUED ANIMALS –  for a three-minute tutorial: https://www.youtube.com/watch?v=wfJvn1wTkWs
http://gooddog.pw/my-account/

SMILEAMAZON– This is fast and simple! When ordering on Amazon, you can designate PEACEAnimals as a recipient of Amazon´s donation of  0.5% of some of your purchases.  http://smile.amazon.com/ch/20-3726038

7-10 de octubre –  mojoneras  – en la delegación – calle Jalisco con Guanajuato – drive north on Avenida México, the main entrance and exit for Puerto Vallarta- stay right and continue north to the large Corona sign – exit right and go to end of this street. Turn left and after a few blocks there will be a “polleria” (chicken sign) on one´s right.  Turn right into Mojoneras and drive about two blocks to the delegación.

DESIGNATED LINE WITH ADDRESS AND DIRECTIONS FOR WEEKLY CLINIC (SPANISH ONLY)   (322) 113 3955
WE NEED LOCATIONS FOR OUR CLINICS IN NEIGHBORHOODS AND TOWNS.  REQUIRED:  BATHROOM, ELECTRICITY, WATER AND PARKING SPACE.
NOTE:  PEACEAnimals, per our agreement with independent contractors, Pets for Life, is obliged to pay extra for driving time and gasoline for areas outside Puerto Vallarta.  We ask that private or government groups pay those extra expenses.
Clinic schedule, including directions and other clinic information are always on website:  www.peaceanimals.organd on this blog:  www.gretchen-peace-and-pv.blogspot.com
LUNCH DONATIONS NEEDED FOR VET TEAM:  PEACEAnimals has a budget of 70 pesos per vet team individual (three persons) per day for 4 days a week for lunches.
Please consider bringing lunches for our vet team to the clinics. If you can do this, please let me know so we can create a lunch schedule. By having lunches donated, these savings can used for purchases of supplies and medicines.

If directions needed, please call our dedicated line (directions are only in Spanish) or refer to our website or this blog.
COST FOR ONE SURGERY WEEK CLINIC IS APPROXIMATELY  $1,800 USD.
PLEASE CONSIDER MAKING A DONATION VIA CHECK, CREDIT CARD, PAYPAL, BEQUEST OR STOCK TRANSFER.  Note:  Stocks are transferred at full value without the donating stock owner being taxed.
DONATION change effective October 1, 2015:

Banderas Bay Charities, Inc, a US 501 (c)(3) charity  located in Portland, Oregon, will focus on the greater area surrounding the Bay of Banderas (Puerto Vallarta) through a variety of organizations, including PEACEAnimals.
Donations for PEACEAnimals should be earmarked as such and payments made out to BBC INC or Banderas Bay Charities, Inc.  See www.bbcinc.org
Amy Welch, Secretary-Treasurer, [email protected]
505 N Tomahawk Is Dr  Portland, OR 97217      503 285 4007
(PEACE will continue fund PEACE Punta de Mita education and health programs in the areas of Punta de Mita and Higuera Blanca). 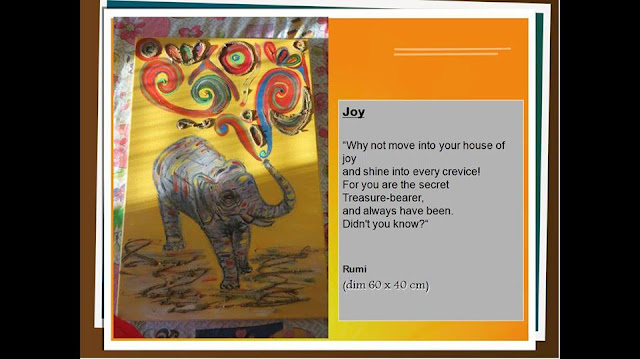