WHAT IS A CHARRO? 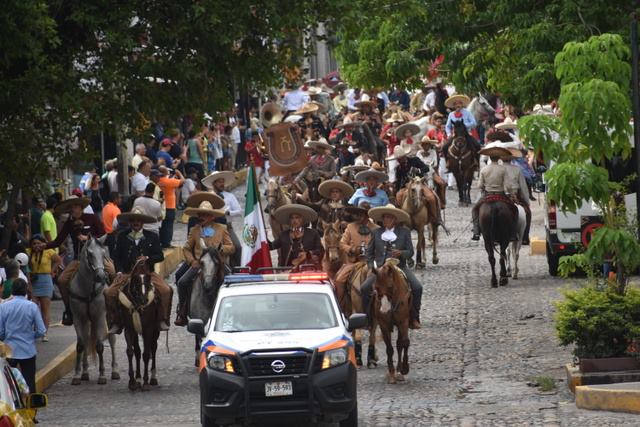 DÍA DEL CHARRO –  A native of the province of Salamanca, Spain, is called a “charro.”  One surmises that these Spaniards brought horses and the word “charro” with them to Jalisco and other central Mexican states after the conquest of México.  Similar to a “vaquero” (“cowboy,” derived from the Spanish word “vaca,” meaning “cow”) and also similar to a “ranchero,” a charro is different regarding culture, etiquette, and social status.

The traditional dress of the charro is very distinctive – a heavily embroidered jacket and tightly cut trousers worn with an oversize, wide-brimmed sombrero. 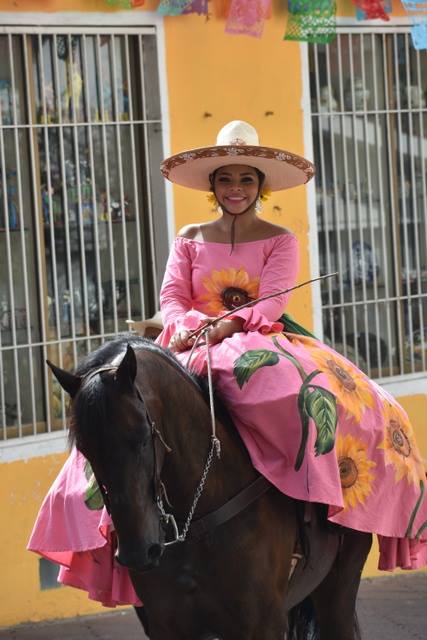 After the conquest of Mexico by Spain in the early 16th century,  the Viceroyalty of New Spain, with very few exceptions, prohibited Native Americans from riding or owning horses.  After the 1810 Mexican War of Independence, horse riding became popular and provided jobs for plantation workers,  messengers, mercenaries and bandits.  It also provided a pleasant pastime. 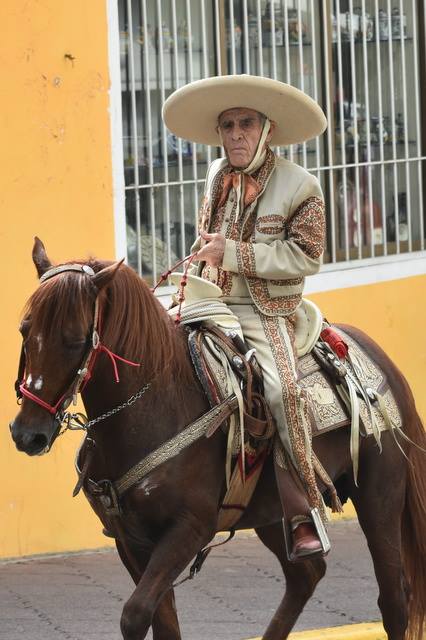 In the 1930´s the “charreada” (“charrería”) became the official sport of Mexico. A competitive sixteenth century Spanish tradition, the charreada is similar to a rodeo.  It always involves cattle and/or horses and consists of nine events for men and one for women. 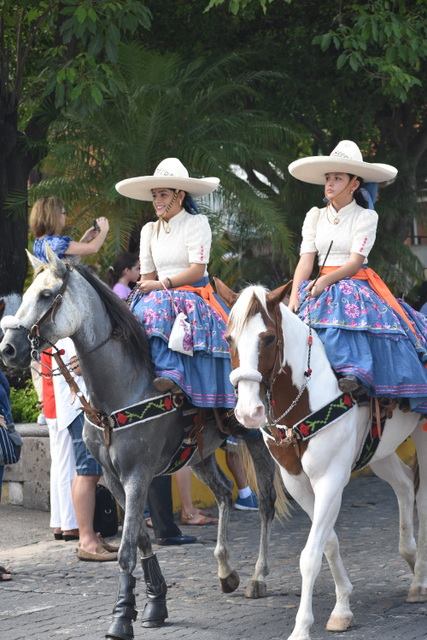 The National Day of the Charro is celebrated every September 14th with parades, charreadas and fiestas.   The parade on the malecón of gorgeous, prancing horses and elegant charros was a thrilling sight.

“EL GRITO”/MEXICAN INDEPENDENCE DAY  – Every year on September 15th at approximately 11 PM, Mexico celebrates the “Grito de la Indpendencia,”  the call to arms made by Miguel Hidalgo. a Roman Catholic priest.  The call to revolt, accompanied by ringing of the church bell in Dolores (now named Dolores Hidalgo),  Guanajuato, was made at 2:30 on the morning of September 16th, 1810. 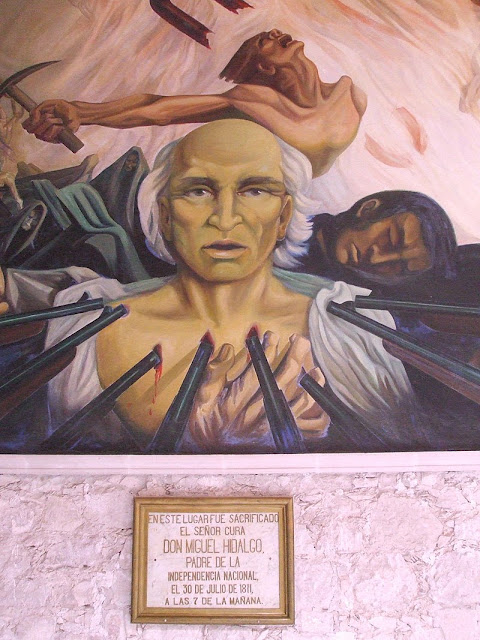 The Mexican War of Independence of 1810 is not to be confused with the Mexican Revolution, also known as the Mexican Civil War, which took place one hundred years later.

To celebrate the ringing of the church bell in Dolores on what is now Independence Day, red, white and green tinsel Christmas bell decorations were strung across Juarez, the main street in centro.  They will stay in place until after the New Year.

Weather stays remarkably pleasant for the normally hot and humid month of September.  Although the cicadas have flown away, it is still raining every week, which wasn´t the case this past summer.  Temperatures are in the low 90´s with humidity in the mid-80s.  Skies are still blue,  breezes are blowing and even though glasses fog over when exiting an AC car,  the heat is not yet oppressive.

BEACH DOG:  He arrived at la Rosita beach while I was away for two weeks.  After seeing him twice when I returned, the dog migrated down to los muertos beach.  He has been playing there in the mornings with other dogs and spends afternoons sleeping at the nearby Page in the Sun restaurant.   I picked him up there a week ago Saturday afternoon, named him “Bruno” for now and took him the following morning to the Sunday free Colina clinic.  He was diagnosed with giardia, an intestinal infection resulting from drinking contaminated water and a mild case of ehrlichia, transmitted by the brown tick.  Bruno was boarded at the Old Town Vet for a week while he recovered. He is four years old,  sweet, smart, playful and needs a good home.   You can meet Bruno at Page in the Sun any afternoon.  Employees are giving him his daily meds for the next three weeks.

LAS JUNTAS is a small town located in the municipality of Puerto Vallarta.  The drive takes about 40 minutes from centro driving north on highway 200.   Past the airport is Home Deport and immediately after it is a stop light where one makes an immediate turn to the east.  That street is Revolución, which leads directly to the town plaza where the church and government offices  (la delegación) are. 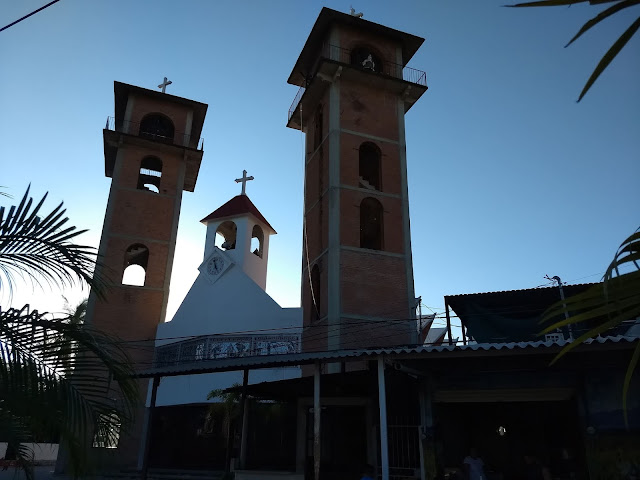 On one side of the square is a rather unusual looking, modern brick and cement church with two steeples.  Immediately adjacent to it is a tortilla factory.  Parked in front of it the morning I was there was a truck loaded with heavy bags of white corn.  One person would slide a bag from the far end of the inside of the truck and lift it onto the back of the second person´s sweat-soaked t-shirt, who would carry it into the factory. 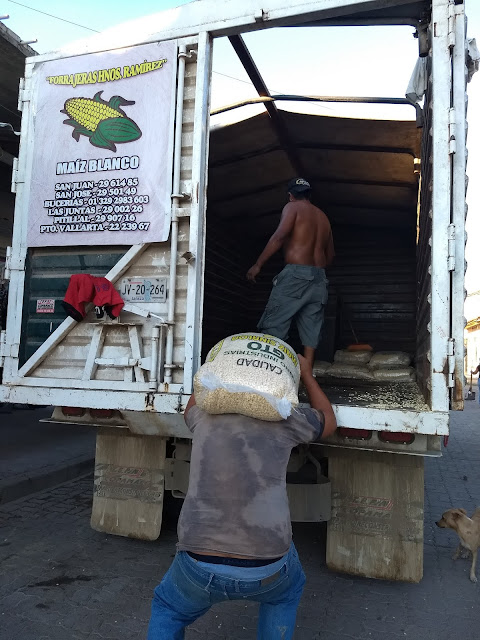 The clinic in las Juntas took place, and always takes place,  in an  untidy, windowless room in the delegación (local government building).  Unfortunately, some of the locals lining up with their pets had to be turned away because the clinics were full every day.

CAMPO VERDE:  (“Green Field”) – And there were green fields driving past the dusty neighborhood of Mojoneras to this tidy municipality of small, cement houses and paved, cobbled and dirt roads.  Campo Verde is a 30-minute drive northeast from centro Vallarta. 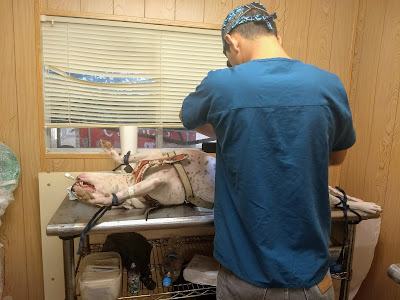 As the original location was found to be unsuitable for this clinic, the state-owned mobile trailer parked in Puerto Vallarta was brought to Campo Verde.  The space inside is small for three vets and a vet tech, but there is AC and we are always grateful for this back-up option.  The tented recovery table was set up outside the mobile unit.  After 9:30, no more pets were able to be registered due to lack of kennels. WE NEED DONATIONS, PLEASE, OF KENNELS. 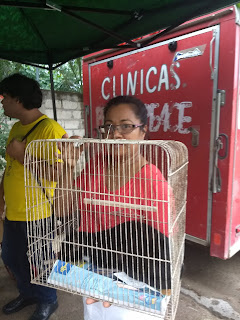 Cats were, as usual, brought to us in boxes, bird cages and bags.  Several of them had to stay in these improvised carriers until surgery and then put back after they had been monitored and recovered from anesthesia.

DONATIONS AT CAMPO VERDE:  Numbers not yet received and will be reported in next blog.

Jon Scott – A soft small dog/cat carrier filled with a small collar and leash, dog toys and some meds.  All had belonged to Jon´s beautiful little dog Chai, who was poisoned not very long ago.

On Tuesday, September 25. Leslie presented to 63 students at the Juan Rolfo school in Campo Verde.