DAY OF THE TURTLE 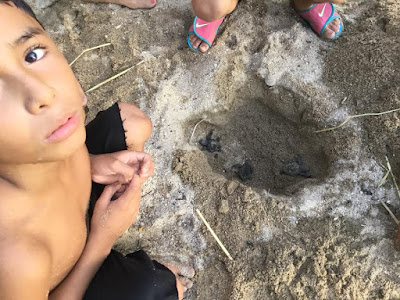 BABY TURTLES:   Locals watched a Riley Olive turtle scoop out a nest with her flippers, lay approximately one hundred eggs on the beach close to the Tomatlán river and then return to the sea.  Later that day, a small group organized by Karla de la Peña, owner of Boca Divers and co-founder of AyudaMutt (dog rescue in Boca de Tomatlán), dug up the eggs from their shallow, sandy nest and reburied them at an unmarked location further away from the river.  With the rains, the river rose considerably and the eggs would have all been washed away. Instead, sixty days later, children watched respectfully as baby turtles were hatching.

Tourist police have been checking beaches regularly in an attempt to prevent dogs and humans from digging up turtle eggs.

Late in the season rains have engorged rivers, making cool, swirling swims exciting.  Favorite spots – the Pitillal river in Playa Grande (lunch at Kali Eco Park next to the river) and the Tomatlán river at the Botanical Gardens (lunch at their restaurant overlooking the river).

Best sellers at the Botanical Gardens boutique are the bamboo straws. 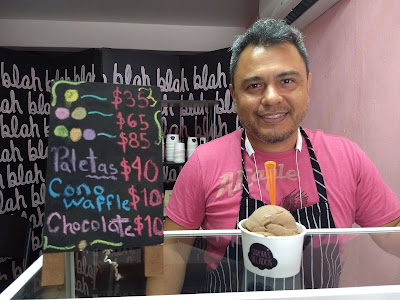 EL COAPINOLE/EL DEMONIO –  Up a bit in the hills to the east of central Coapinole, a lively municipality slightly north of Puerto Vallarta, is the neighborhood  “El Demonio Blanco.”

Curious as to why this area would be called “the white demon,” I asked my friend Gabriela why.  El Demonio Blanco was a well-known wrestler in the 70´s who wore a white mask.  A wrestling arena was consequently built for him, and though it´s no longer there, the name remains.

On the way to the clinic Wednesday, I stopped off at the fish market at the north end of the malecón, hoping to pick up a mama Siamese and her four young kittens plus three older tabby kittens and their mama. Employees and I were unable to catch any of them, but one of the tabbies walked into an open kennel and I quickly shut the door.

The clinic was already busy at 8:30 when I arrived, thanks in part to the 200 flyers distributed by Cristhian, a teenage neighbor of Julie Bunker, who provided the large patio of her lovely lavender home for this clinic.  An unshaven man with bad teeth brought in two small dogs to be sterilized.

One of them was an emaciated female Chihuahua whose right back leg had been injured when she was hit by a car.  The owner said this had happened two weeks ago, and she was just beginning to walk on it again.  The man said he would like to give the dog up after being spayed.  Unexpectedly, a woman visiting the clinic adopted the little dog.

Pelicans were waddling on the sidewalk in front of the fish market at the north end of the malecón when I dropped off the fluffy-tailed tabby.  At the same time, at the southern part of the malecón, a far away hurricane was causing high waves to curl and crash over the sea wall.  Saturday night, a beautiful, brilliant, big rain and electrical storm.


PLUS pregnancies terminated for 1 dog with 3 fetuses and 1 dog with 11 fetuses.

DONATIONS AT CLINIC IN COAPINOLE:  980 PESOS

DONATIONS TO PEACEANIMALS: None this week.