March 21st was the first day of spring and after days of cool, overcast weather, it was blue and balmy.  The first pink blush of blossoms on amapas trees compete with the beauty of the golden blossoms of primaveras.   Days later, I would be in California, where bright, yellow daffodils echo the color of the primaveras and call to mind Wordsworth´s most famous poem, “I Wandered Lonely as a Cloud.”

Early morning dog walking on the malecón on Saturdays is a chance to visit the mercado at Lázardo Cárdenas park before it gets busy.

A few blocks from the fancy pier, the mercado is jammed during high season from about 10 in the morning until 2 in the afternoon.  Food, flower,clothing, accessories and artisan vendors begin to set up their stands about 8 AM and by 9 AM, the musicians begin to play and sing. The crowds will continue to get smaller for the next four Saturdays, when the mercado closes until November.

There are many attractive stands.  My favorite belongs to the smiling, young man who designs all sorts of baskets and bags.

San Vicente is a 45-minute drive northeast and where we visit at least twice a year.  On the way into town on the narrow two-lane road, I passed many dogs on the street, including two tan copulating Chihuahuas. More puppies.  The clinic took place a few blocks away from the main plaza and church in a small, empty white cement building that had been a little grocery store. Plywood shelves and the deli fridge were still in place.  A long line of owners and pets were waiting when I arrived at 8:30 on a Wednesday, our first clinic day of the week.  Locals brought in stray dogs that they had found homes for and were grateful for the donated collars and leashes.  A small, skinny brown male dog had followed two of the rescues to the clinic.  He was hungry, but also skittish and impossible to catch.  This dog and so many others are at risk for starvation, injury or death caused by a vehicle, poisoning and disease.  Surviving, they will breed. 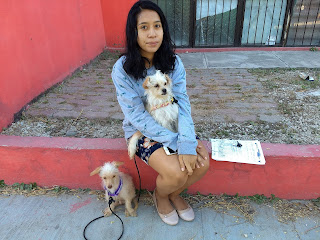 PLUS pregnancies terminated for
1 cat with 5 fetuses 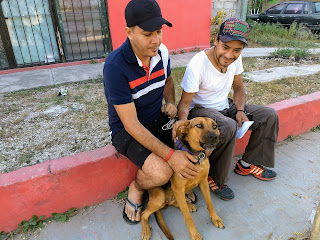 THIS CLINIC WAS  MADE POSSIBLE BY A GENEROUS GRANT FROM FRIENDS OF HOMELESS ANIMALS (FOHA).  www.fohari.com

PEACEAnimals has visited this convenient location not far from Costco many times. The clinic always takes place in a bodega across the street from the shady parque los sauces.  Thank you to Sofi Gonzalez and her husband for letting us use their large and pleasant space.
Steve Stowell, our newest board member, and I visited the clinic the morning after I returned from California.  Angelica, owner of AngeliCAT, a cat rescue/adoption, was there with two feral female cats she had trapped.  After being spayed, Angelica would keep the two tabbies enclosed for five days while
they recovered, and then release them to the vacant lot where they live with so many other cats.
Three women brought in three street dogs from colonia Villa de Guadalupe and said there were many more there that were homeless.  They had found people to adopt the two large dogs and were happy for donated collars and leashes.  The third dog was a young female-  a pretty, white Lab mix- that was trembling in a kennel.  As she was to be released back to the street, I called the albergue (city shelter formerly known as the acopio), to see if they had space.  Yes!  Angela Kelleher, enthusiastic volunteer, generously offered to take the dog to Dr. Tamayo to be tested for distemper and then to the acopio if tested negative.  The sweet dog is now available for adoption at the albergue.  tel.: 293-3690
Sterilizations at clinic in las aralias:  female cats – 37; male cats – 24; female dogs – 43; male dogs – 25    TOTAL:  129