SEMANA SANTA (HOLY WEEK):  The date is determined by an astronomical event. It begins every year on the first Sunday following the first full moon of spring.  This year,   Holy Week began on April 14th, Palm Sunday. 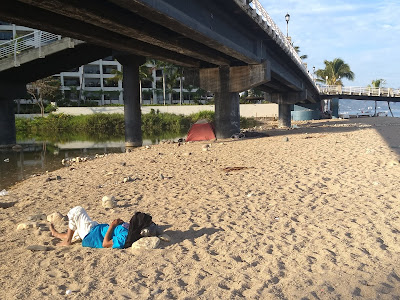 Workers in México are given the four days off preceding Easter Sunday and schools are on vacation for two weeks.

Semana Pascua begins on Easter Sunday, and although workers have returned to their jobs, beach and river locations in the area of Puerto Vallarta are filled with celebrants for another week.  Extra food stands are still set up, as well as tents, towels and flattened cardboard boxes on beaches for overnighting.  Although there are trash receptacles in close proximity to the sandy beaches, trash is often left where picnics and drinking took place.  From the beaches and rivers, styrofoam and plastic find their way to the bay and out into the Pacific, where some of it will be ingested by marine animals.

To escape the crowds, we drove to Litibu beach in Nayarit, about an hour and fifteen minutes north.  With the exception of a few couples walking on the long, sandy beach and three horsemen exercising their beautiful, long-maned and long-tailed horses, we were the only ones there.  Waves were gently rolling towards shore and the water was a pleasant temperature, very clear and filled with small fish. 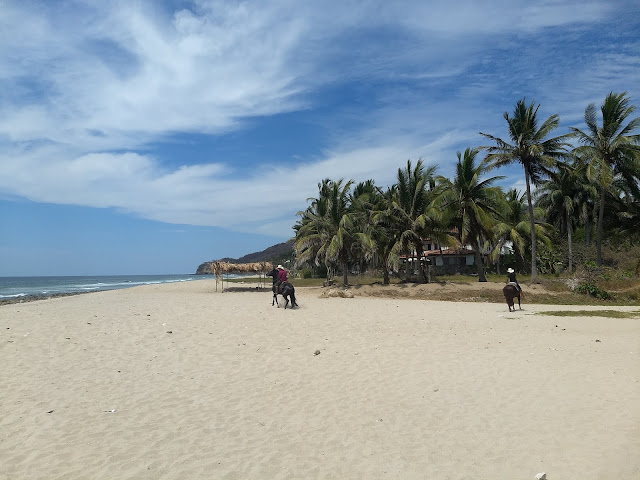 TALPA: A place of pilgrimages.  Approximately a three-hour drive from Vallarta, one climbs the foothills of the Sierra Madres,  passing the turn for San Sebastián and then descends the narrow, winding road into a green valley, whose hills are covered with pine trees.  This is ranch country,  and horses and dogs are in abundance.   Mascota is the first real town, and best known for its beautiful, unfinished 19th century “Templo Inconcluso de la Preciosa Sangre.” Today, it is best known as the home for the “Virgin Rosario de Talpa,” a small statue housed in the basilica of Nuestra Señora del Rosario.  Affectionately called “La Chaparrita (“The Little Short One”), there are four pilgrimages annually to see the Virgin of Talpa, as she is said to have healing powers.

Photos of the clinic in Talpa were taken by volunteers.  I was unfortunately unable to attend because of family visiting for Easter.

Laura Chavez-Halberg organized this clinic and secured the extra costs (6,000 pesos) for gasoline and driving time
for an out-of-town clinic.  The ayutamiento of talpa and the mayor, Martin Eduardo Guzman, helped support this effort to reduce the suffering of cats and dogs.

In spite of flyers and advance publicity, the response was lower than anticipated and hoped for.  Nevertheless, the number of sterilizations will have serious impact on the unwanted pet population in Talpa.

Donations at clinic in Talpa:  1,420 pesos
Two hundred dollars (one-ninth of our cost of $1,800 USD per clinic) from the $11,000 grant awarded by FRIENDS OF HOMELESS ANIMALS (FOHA) helped underwrite the clinic in Talpa (8 animals).  Total number of cats and dogs sterilized as a result of this generous grant =  867 cats and dogs www.fohari.com
DONATIONS TO PEACEANIMALS:
Bo Jarnstedt – $75 USD
Lilka Jones – $17 USD (monthly)